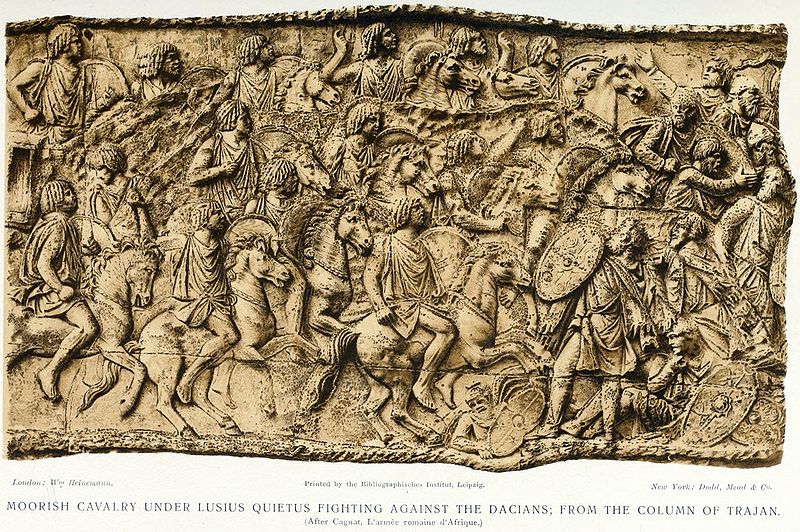 Marble Statue of a Muurish Roman

The no go area of popular fictionalized white bwoy history is that “the Aryans built Rome”. How true is this? No it is a damned lie!

Was Rome a white Empire? Were the Romans white?

The truth was that Rome was a multi-ethnic Empire. Any true scholar with the slightest mastery of classics will attest to this. Any one who has had to write a thesis on Rome in at the Doctoral level would not contest this truth.

Rome as well as the entire southern and central and western Europe was built by aboriginal black Europeans sometimes called the mysterious Celts, NIGRI-LATINIS, the IBERIANS or the Maurs.

This painting above depicts the forty Roman soldiers who were martyred for their Christian beliefs in the fourth century by being forced to stand barefoot in a freezing lake. Part of the Novgorod School of painting, Russia 15th century.

Sometimes authors attribute the origin of Rome to Etruscans, or to Greeks or to Canaanites. It is generally acknowledged that those three powers were themselves basically multi-ethnic, and also that the Canaanites were singularly black and African in origin.

Later we get an influx of barbarians nomads, who were assimilated and romanized.

Then slaves from the Slavic and Germanic tribes were captured from Northern Europe and used on Roman plantations in Central Europe.

And then one must not forget that the cultural founts of Rome was not anywhere on the European mainland but in North Africa, with Egypt and the province of Africa being the most sophisticated, and civilized in arts, science and culture. The cultural capital of the Roman Empire was Alexandria in Egypt.

All the inhabitants of the Roman provinces of Africa could easily attain to Roman citizenship and even aspire to become Emperors of Rome.

Not so for today’s so-called white people who were actually called barbarians and hated by the Roman state and Empire. They were the threats of the day, the potential carries of contagions mental and spiritual, eroders of morality. Besides the oracles of Delphi had forcasted that barbarians whites would eventually overun the emipre.

They eventually did. Bursting the barriers of imperial Rome which had contained them in Central Europe on the Northern side of the River Danube, the barbarians gothic and slavic hordes swamped Rome, southern and central Europe, western Europe as well, bursted into Africa, and then onwards to the Americas and Australia. Like demons released from hell.

Those Barbarians are the direct ancestors of todays so-called Italians, French, Germans, English, Belgia, Holland, Sweden, Russia, and the whole of the so-called white races of todays Europa.

And those gothic descendants have spent a thousand years, re-writing history, destroying monuments, burning books and libraries, in an attempt to hide the truth about themselves, and to usurp the majesty and excellence of the great black civilizations. They would trick the black children (the real owners of this world) into a life of complancency and surbodination, wherein they are unable to assert their legitimacy.

Which is why they have invested so much energy in re-writing and retelling the story of the Roman Empire and its fall, at the hands of the barbarians so-called whites.

See the Roman Dread Locks Legion of Lucius Quietus, the Overall Commander of the Roman Legions running the Dacian barbarians away then ask yourself, where is the fictionalized so-called white bwoy with “his classical Roman nose” in this picture of the Column of Trajan?

151 thoughts on “Were the ancient Romans white? Not on your Life! – by – Oguejiofo Annu”