A new book is out documenting Ethiopian Emperor Haile Selassie’s exile in the UK in late 1930s. read more

Millions of people around the world are familiar with the hypnotic rhythms of reggae that originated from Jamaica, a small colonial island in the Caribbean Sea. Reggae is what propelled the ideology of Rastafari to the world through the melodious, socially conscious tunes of Bob Marley, Burning Spear, Dennis Brown, Jacob Miller, and Peter Tosh. Jamaican culture is most commonly described as rooted in Africa because the majority of the population is of African descent. read more 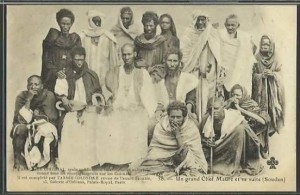 Photograph: A Moorish chief and his suite.

Shiva is one of the three major gods in the Hindu religion. The difference between Shiva and the other gods, is that Shiva loves his marijuana. Like Rastas, followers of Shiva also love the holy herb. In fact, at a recent festival to honor Shiva you would think you were in a Rasta camp in Jamaica. read more

The following is a partial list of the various tribes throughout north, south, east and west Africa who are descendants of the Hebrew Israelite
nation: read more