Before you pick up that bottle of pill to pop into your mouth to relieve that nagging headache, consider that a U.S. Food and Drug Administration report last month found that severe liver damage and even death can result from use of popular painkillers such as aspirin, ibuprofen and acetaminophen based drug like Tylenol. read more 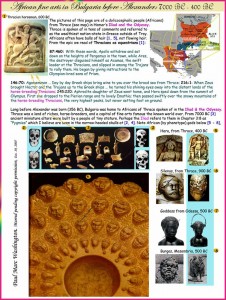 It appears that high level white collar type robber has just occurred at the Royal Canadian Mint, the institution that prints physical cash, and mints gold coins for the Canadian government. read more

Mr. Harold Smith was a colonial officer posted to duty in Africa. He served in many African countries including Nigeria. As an insider in the British colonial system, Mr. Smith has a lot of interesting views and ideas to provide. Here Rasta Livewire presents excerpts of his views and accounts of colonial socio-political malfeasace of the imperialist, racists, and so-called colonists: read more

The Failure of Emperor Haile Selassie

It is a pity that a man of the limited intellectual calibre and weak political character like Haile Selassie became Emperor of Abyssinia at so crucial a time in the political history of the world. Unfortunately, Abyssinia lost the controlling influence of a political personality of patriotic racial character like the late Menelik, whose loyalty to his race and devotion to his country excelled all his other qualities, to the extent that he was able to use that very strength to continuously safeguard the interests of the Ethiopian Empire. What he did so well to preserve, a cringing, white slave hero worshipper, visionless and disloyal to his country, threw away. This is the impression the serious minded political student forms of the conduct of the ex-Emperor of Abyssinia. read more

Rastafarians refer to this article as the Prohecy by Marcus Garvey. It welcomes the crowning of Emperor Haile Selassie I of Ethiopia. The article is reproduced here by Rasta livewire verbatim as it was first published in November 8, 1930 in Garvey’s Jamaican newspaper, The Blackman: read more

A second autopsy was performed on Michael Jackson’s body on Saturday hours after it was released to his family by the Los Angeles County Coroner’s Office, the Los Angeles Times has reported on its website. read more

Several global financial institutions started off as slave profiteering firms before growing into multi-national behemoths of today. Many acknowledged their links to slavery. Others have apologised for and have set up programs to make amends. read more