Thousands of people have gathered in the Indian capital, Delhi, to take part in a rally to protest against rising food prices and unemployment.
A steady stream of protesters, carrying red flags, has been marching through the streets of central Delhi since early morning. read more

Grammy-winning reggae singer Buju Banton was convicted Tuesday of conspiring to set up a cocaine deal in 2009, a verdict that elicited anguish and disbelief among supporters in a crowded courtroom and from other artists in his native Jamaica. read more

Col Gaddafi’s second son and heir apparent appeared on television late in the evening to say there would be “rivers of blood” and that Libya was on the brink of a civil war that would burn its oil wealth. read more

Mathieu DaCosta was an black ladino Moorish Jew of Iberian origins. He was a Portugese Moor, and his family had lived in Portugal for at least 600 years as the lords of the land before they were brutally conquered, and expelled from Portugal by the barbaric hordes of Reconquista Gothic crusaders, under the banner of the papacy of Vatican. The Moors of Portugal were expelled by 1497, with the Edicts of expulsion and the “Leis de Limpeza de Sangue”(The Laws of the Cleaness of Blood). read more 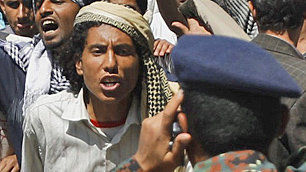 Alcohol abuse is killing 2.5 million people each year and governments must do more to prevent it, the World Health Organization said Friday.

Some 4 percent of all deaths worldwide are attributable to alcohol, the U.N. body said. read more