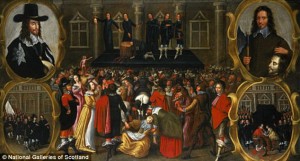 This painting of Charles I’s execution in 1649 shows people surging forward to mop up the former king’s blood. It was thought to have healing properties

They have long been famed for their love of lavish banquets and rich recipes. But what is less well known is that the British royals also had a taste for human flesh.

A new book on medicinal cannibalism has revealed that possibly as recently as the end of the 18th century British royalty swallowed parts of the human body.

The author adds that this was not a practice reserved for monarchs but was widespread among the well-to-do in Europe.

Medicinal cannibalism: Both Queen Mary II and her uncle King Charles II both took distilled human skull on their deathbeds in 1698 and 1685 respectively, according to Dr Sugg

Even as they denounced the barbaric cannibals of the New World, they applied, drank, or wore powdered Egyptian mummy, human fat, flesh, bone, blood, brains and skin.

Moss taken from the skulls of dead soldiers was even used as a cure for nosebleeds, according to Dr Richard Sugg at Durham University.

Dr Sugg said: ‘The human body has been widely used as a therapeutic agent with the most popular treatments involving flesh, bone or blood.

‘Cannibalism was found not only in the New World, as often believed, but also in Europe.

There is this New world Depiction of cannibalism in the Brazilian Tupinambá tribe as described by Hans Staden in 1557. Whether true or not, the myth ignored the fact that Europeans consumed human flesh. The history of medicinal cannibalism, Dr Sugg argues, raised a number of important social questions.

‘Whilst corpse medicine has sometimes been presented as a medieval therapy, it was at its height during the social and scientific revolutions of early-modern Britain.

‘It survived well into the 18th century, and amongst the poor it lingered stubbornly on into the time of Queen Victoria.

‘Quite apart from the question of cannibalism, the sourcing of body parts now looks highly unethical to us.

‘In the heyday of medicinal cannibalism bodies or bones were routinely taken from Egyptian tombs and European graveyards. Not only that, but some way into the eighteenth century one of the biggest imports from Ireland into Britain was human skulls.

‘Whether or not all this was worse than the modern black market in human organs is difficult to say.’

The book gives numerous vivid, often disturbing examples of the practice, ranging from the execution scaffolds of Germany and Scandinavia, through the courts and laboratories of Italy, France and Britain, to the battlefields of Holland and Ireland and on to the tribal man-eating of the Americas.

A painting showing the 1649 execution of Charles I showed people mopping up the king’s blood with handkerchiefs.

Dr Sugg said: ‘This was used to treat the “king’s evil” – a complaint more usually cured by the touch of living monarchs.

‘Over in continental Europe, where the axe fell routinely on the necks of criminals, blood was the medicine of choice for many epileptics.

‘In Denmark the young Hans Christian Andersen saw parents getting their sick child to drink blood at the scaffold. So popular was this treatment that hangmen routinely had their assistants catch the blood in cups as it spurted from the necks of dying felons.

‘Occasionally a patient might shortcut this system. At one early sixteenth-century execution in Germany, ‘a vagrant grabbed the beheaded body “before it had fallen, and drank the blood from him..”.’

The last recorded instance of this practice in Germany fell in 1865.

Whilst James I had refused to take human skull, his grandson Charles II liked the idea so much that he bought the recipe. Having paid perhaps £6,000 for this, he often distilled human skull himself in his private laboratory.

Dr Sugg said: ‘Accordingly known before long as “the King’s Drops”, this fluid remedy was used against epilepsy, convulsions, diseases of the head, and often as an emergency treatment for the dying.

‘It was the very first thing which Charles reached for on February 2 1685, at the start of his last illness, and was administered not only on his deathbed, but on that of Queen Mary in 1698.’

Dr Sugg’s research will be featured in a forthcoming Channel 4 documentary with Tony Robinson in which they reconstruct versions of older cannibalistic medicines with the help of pigs’ brains, blood and skull.

The book, called Mummies, Cannibals and Vampires, will be published on June 29 by Routledge and charts the largely forgotten history of European corpse medicine from the Renaissance to the Victorians.

6 thoughts on “Mummies, Cannibals and Vampires of Europe”