POPE Francis, on Tuesday, cancelled some of the engagements on his agenda for the second day in a row because of slight illness, the Vatican said. read more

Former Nigerian President Olusegun Obasanjo in an interview he granted to Bloomberg TV on May 30 2014, criticised Jonathan for failing to act swiftly to rescue the over 200 abducted Chibok schoolgirls. The girls have been with Boko Haram since April 14 this year. read more

Question: You are quoted as saying that the abduction of the school girls in Chibok is a scam. Some people feel shocked by that statement coming from you even when we have seen the international community coming in… read more

ORI – Ruler of the head. He is a metaphysical concept important to Yoruba spirituality and way of life. Ori, literally meaning “head,” refers to one’s spiritual intuition and destiny. It is the reflective spark of human consciousness embedded into the human essence, and therefore is often personified as an orisha in its own right . In Yoruba tradition, it is believed that human beings are able to heal themselves both spiritually and physically by working with the orishas to achieve a balanced character, or iwa-pele. When one has a balanced character, one obtains an alignment with one’s Ori or divine self. Alignment with one’s Ori brings, to the person who obtains it, inner peace and satisfaction with life. To come to know the Ori is, essentially, to come to know oneself. The primacy of individual identity is best captured in a Yoruba proverb: “Ori la ba bo, a ba f’orisa sile”. When translated, this becomes It is the inner self we ought to venerate, and let divinity be. read more

My mom, sister and countless relatives have all died of cancer.

We heard of a chiropractor that was having great success using frankincense topically and we knew a person that had a success with it. read more 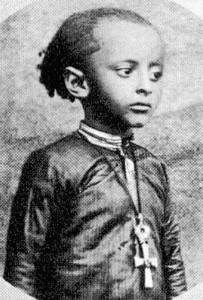 In Amharic language, the word Ras, literally means “head”. It is an Ethiopian title equivalent to prince or chief.

The personal given name Täfäri (teferi) means one who is respected or feared. read more

Elizabeth of England stands down on most of her ceremonial functions appointing her children and grandchildren to represent her. February 2013 read more

So-called King Juan Carlos of Spain has announced his intention to abdicate, after nearly 40 years on the throne.

Last two years the so-called King Carlos fell and broke his waist into three places while hunting for African Elephants. Analysts and observers at Rasta Livewire there and then predicted that he had fallen, was broken and irreparably damaged. See Rasta Livewire read more