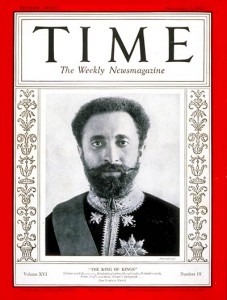 Who is the Lion of Judah: Emperor Haile Selassie I and African Liberation – by – Jide Uwechia

Before 1959, Ethiopia ruled by Haile Selassie was the only genuinely independent black state in the world. Why do Rasta people adore Haile Selassie? Why do they call him their King, their lord and their saviour?

Well because Black people had been made to submit before the rapaciousness of their European pale cousins all over the world, at least one hundred years before the birth of Haile Selassie. With the exception of Ethiopia!

In those days when the young lion of Judah, Ras Tafari, crowned as Emperor Haile Selassie, the King of Kings, there was no black nation that had its political independence. Africa was almost completely colonized. With the exception of Haile Selassie’s Ethiopia.

So who did you really think began formenting unrest through out Africa? Who fought for equality of man to man irrespective of colour? He began with his own backyard. Who freed the Habashis, the Tigreneans, the Eritreans from internal slavery since slavery was accepted in Ethiopia until the 1930s? Who abolished slavery in Ethiopia? Who built schools for the masses? Who gave them modern infrastructure and facilities? Who gave Ethiopia a modern economy? Who built Ethiopia? Who is this man they call the Lion of Judah?

Who inspired the entire Africa? Who electrified the world? Who became the hope of the masses? Whose independence was seen as a of beacon light, an example of true black political integrity? Who was it who defeated a fully equipped modern European army (and the Roman Catholic Church crusader alliance) on African soil with little more than words of righteousness? Who crushed the head of the facists? Who prevented Africa from becoming a European territory like South America? Who is the Lion of Judah?

Who was the symbol of black imperial regency in a world where niggers were considered less than cattle? Who was the symbol of noble black resistance? Who demonstrated to the world by his patrimony that Solomon whereeverso he may have lived was indeed a Black man? Who is the Lion of Judah?

The question you have to ask yourself is this? In a rabidly racist world of 19th century and early 20th century, why did the white bwoys consider Haile Selassie to be their superior? Recall they accepted his claim to Solomonic dynasty. Recall they acknowledged his imperial majesty, and treated HIM as more than their equal….

The question to discern is: who is this little black man, who without a modern army, without political clouth or wealth was able to keep the rapacious Europeans away from his country first and then ran them off the entire African continent? Can you walk with the Lions each morning? Who is the Lion of Judah?

Remember the Monrovia and the Casablanca alliances?Why did the 40 or so eminent African leaders who could not come to any unity amongst themselves suddenly unite and accepted Addis Ababa as their capital and Emperor Haile Selassie as their boss? Who is the Lion of Judah? Who is this King of Kings…

He is His Imperial Majesty, Emperor Haile Selassie I, true and faithful, mightful and dreadful itinually!

19 thoughts on “Who is the Lion of Judah: Emperor Haile Selassie I and African Liberation – by Jide Uwechia Rasta Teachings on Rasta Livewire”