By Jide Uwechia with cited sources

The Benin Haplogroup or Haplogroup 19 Common in Africans, southern Greeks, Sicilians, and Albanians

There are at least four distinct African, (known as Senegal, Congo, Benin, Bantu Hbs Haplogroups) and one Asian chromosomal backgrounds (haplotypes) on which the sickle cell mutation has arisen.

The Benin haplotype (which originates from Nigeria, West Africa) accounts for HbS associated chromosomes in Sicily Northern Greece, Southern Turkey, and South West Saudi Arabia, suggesting that these genes had their origin in West Africa. The Asian haplotype is rarely encountered outside its geographic origin because there have been few large population movements and Indian emigrants have been predominantly from non HbS containing populations. Per:Graham R. Serjeant, MD, FRCP, The Geography Of Sickle Cell Disease:Opportunities For Understanding Its DiversityRSITY: http://www.kfshrc.edu.sa/annals/143/rev9239.html 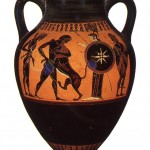 Additionally, previous data suggest that the S/Bantu haplotype (from Southern Africa) is heterogeneous at the molecular level. Recent studies also report a similar heterogenity for the Benin Haplogroup. A study demonstrated the presence of the A -499 TA variation in sickle cell anemia chromosomes of Sicilian and North African origin bearing the S/Benin haplotype (from Nigeria). Being absent from North American S/Benin chromosomes, which were studied previously, this variation is indicative for the molecular heterogeneity of the S/Benin haplotype. Am. J. Hematol. 80:79-80, 2005.

According to a study done in 1973, before the availability of the advanced data cited above, “the occurrence of the sickle-cell trait in southern Europe …. is believed to reflect gene flow from the Middle East.” See A. P. GELPI, M.D, “Migrant Populations and the Diffusion of the Sickle-Cell Gene” August 1, 1973 vol. 79 no. 2 258-264 http://www.annals.org/content/79/2/258.abstract.

Y Haplogroup E-M78 and YAP In Black Africans and Greeks

Y Haplogroup E-M78 a derivative of E3B is a signature African gene as confirmed in research studies over the last few years. The high frequency of this haplogroup in Greece suggests the presence of a substantive African population in that region during prehistoric and historical time periods.

A recent paper has detected clades of haplogroups J and E3b that were likely not part of pre-historic migrations into Europe, but rather spread by later historical movements. Greeks .. [then there is] the marker J-M267, which may reflect more recent Middle Eastern admixture.

(Semino et al., Am J Hum Genet, 2004) E3b originates from East Africa while there is a high frequency of J-M267 in the East Coast of Africa as well as the Red sea coast of Arabia.

A recent sampling of the Greek population comprised 36 Peloponnesian samples, 5 of which were J-M172(xM12) and 17 of which were E-M78 (R.K., unpublished data).

The study by by Di Giacomo et al. found the following African haplogroups in Greeks: Haplogroup A which is highly specific to West Africa, R1a, DE, and J2*(xDYS413= 18)J*(xJ2). R1* which probably gave rise to R1a is found in Northern Cameroon. DE is found principally among Nigerians and it is suspected that it originated from Nigeria. J is very prominent in East, and North Africa.

HLA genes are reliable markers of past population movement and are still used in laboratories today to establish genetic inter-relationship amongst seemingly diverse peoples.

HLA genes in Macedonians and the sub-Saharan origin of the Greeks (2001) was a study conducted by Dr. Arniaz and other scholars in a top flying Spanish University. This study uses HLA genes to establish the African dimension of the roots of ancient Greece.

According to the Arniaz study, …Greeks are found to have a substantial relatedness to sub-Saharan (Ethiopian) people, which separate them from other Mediterranean groups. Both Greeks and Ethiopians share quasi-specific DRB1 alleles, such as *0305, *0307, *0411, *0413, *0416, *0417, *0420, *1110, *1112, *1304 and *1310. Genetic distances are closer between Greeks and Ethiopian/sub-Saharan groups than to any other Mediterranean group and finally Greeks cluster with Ethiopians/sub-Saharans in both neighbour joining dendrograms and correspondence analyses. The time period when these relationships might have occurred was ancient but uncertain and might be related to the displacement of Egyptian-Ethiopian people living in pharaonic Egypt. See Arnaiz-Villena A, et.al: HLA genes in Macedonians and the sub-Saharan origin of the Greeks. Tissue Antigens. 2001 Feb; 57(2): 118-27

There is a fraudulent claim (by those with idealogical investments in the topic) on the Internet that this study has been “retracted” or “refuted.” The study is perfectly valid. Sub-Saharan-specific and quasi-sub-Saharan-specific alleles were definitely detected in the Greek population at the DRB1 locus, and this is not open to question.

It would be helpful here to discuss the study that was retracted, and the reason why. It is the work titled: “The origin of Palestinians and their genetic relatedness with other Mediterranean populations” (which contained some cross-referenced Greek data in a neighbor-joining dendogram and a correspondence analysis) that was retracted. And it was retracted solely and strictly for political reasons, as this Observer article makes crystal clear:

(Keep in mind we are dealing with the study on the relatedness of Jews and Palestinians at the moment, which was retracted, and not the one on the Greek-Black African relatedness, which was not retracted and remains valid. The two must not be confused.)

“Hb S is common in some areas of the Mediterranean basin, including regions of Italy, Greece, Albania and Turkey (Boletini et al., 1994) (Schiliro et al., 1990). Haplotype analysis shows that the Hb S in these areas originated in Africa. The genes probably moved along ancient trading routes between wealthy kingdoms in western Africa and the trade centers in the Mediterranean basin.” (Harvard University, http://sickle.bwh.harvard.edu/scdmanage.html)

“Templeton gives a modern-day analogy: the presence of a gene for sickle cell anemia in Caucasians in Portugal. The gene traces back to a mutation that occurred in Africa and spread through interbreeding between Africans and Europeans. “The Africans didn’t come up, reconquer the Iberian peninsula, kill off all the Europeans, and that’s why there are sickle cell alleles in Portugal today,” he says. The presence of the sickle cell gene in Portugal “means that Portuguese and Africans have met and they’ve interbred, just like humans tend to do.” – “Out of Africa” – Ruth Flanagan, Contributing Editor, Earth Magazine, http://www2.mc.maricopa.edu/anthro/l…ofAfrica5.html