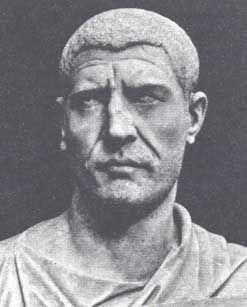 Emperor Philip the Arab was not Persian or Turkic Arab. He was one of the glorified black Arabs of history. Born in Syria, kiths and kins with the Habashis of Abbysian, the Sabeans of Yemen and those of Saba in Meroe, the black Arabs of Arab Felix, Arabia Deserta, Arabia Petra, and Syria, lived in the Arabian Pennisula during the ascendency of the Roman empire.

The black Arabs like Philippus were the Arabs of the Roman days before the first Parthians (Farsis) and the Turks came down from central Asia into Persia and then swarmed over the population demographics of Arabia.

However, it is a little known but happy facts that the black Arabs are not all destroyed. They still exist as much as the international media tries to hide them, or distort their stories or twist their identities.

The black Arabs tribes of yore, they still live there onto this day as modern day southern black Yemenis, black Saudi Arabians, black Kuwatis, and black Omanis. The busts of Roman Emperor Philip are timeless testimonials to the physical type that was called Arabs in Roman times.

Philip was nicknamed “the Arab” because he had family who had originated in the Arabian peninsula, and who were believed to be distant descendants of the prestigious Baleed family of Aleppo. It is strongly believed by many historians that his family origins ultimately laid in Yemen among the black Ghassan tribes many of whom live and constitute a part of the local population of the present day Sudan and Eritrea Republic.

Philip was the son of Julius Marinus, a local Roman citizen, possibly of some importance. He rose from humble circumstances to become a soldier, a Praetorian Guard, one of the personal bodyguards of the emperors of Rome and then the Praetorian prefect, the equivalence of the Commander of the Praetorian Guards and the army.

In this vantage position he manouvered himself to become the new Emperor following the death of Gordian III who died in 244 during his campaign against the Parthians of Persia, those the forebearers of today’s Iran who were then making incursions into the Roman empire following their migration from Turkmenistan into Northern Persia.

Philip’s rule started with a peace treaty with the Parthians (Farsi, Iranians) and a new war against yet another Germanic incursion on the provinces of Pannonia and the Goths invaded Moesia (modern-day Serbia and Bulgaria) in the Danube frontier.

The Gothics forebearers of the present day Spaniards, Portugese, French, Germans, English, Nowerges and Swedes, and Iranians were then aliens in Europe, as well as in Iran, having migrated from Turkmenistan to the shores of River Danube. The Parthian branch of the Gothes headed down to Iran. These peoples collectively call themselves the Aryan tribes and they were the same ones that the neo-Nazis, the facists and the white supremacists of today rally to arms.

The Aryans were a plague to the peace and security of the empire and as such Philip, like many other Roman emperors before and after him was preoccupied with fighting and defeating this hungry, angry, violent hordes of Gothic invaders determined to conquer Rome and civilization.

Philip finally defeated the Goths in the year 248, but his army was restive probably due to a harsh service conditions, breakdown of discipline due to the long and intermitten wars against the Goths.

The rebellion that soon arose and which was surpressed, before it eventually went underground, was the slow and steady fire that burnt down the life of Emperor Philip. Gaius Messius Quintus Decius, the man he had nominated as governor of the province of Pannonia following the suppresion of the rebellion, was to lead another uprising later in the epoch. Emperor Philip died in this second uprising organized by his own army in September 249.

It is important that the history of men and women like Philip the Arab need be told for what it really is, so that the truth can be seen, for the truth is life.

Black people were at the heart and centre of events in Roman empire, especially given that the true cultural capital of Roman empire was in Alexandria, an African city in Egypt, people mostly then by individuals of African ancestry. All the way from Syria to Mauritania, it was a black African world, of black Jews, black Arabs, black Kushites, Mauritanias, Nigri latinis, Cartheginians or Kartha-Hadassians, Blemmys and Numidians.

Emperor Philippus Arabs is a physical specimen of those great men who ruled and owned Rome, before the success of the invasion of the Gothes, the Cagoths, and the chretins.

Emperor Philip is one of our own, a reminder that there are many stories of our achivements as a people that must be told, an inspiration to the soul of any true seeker of African ancestry. For he left from Syria, our original land, and went on to Rome, and attained the greatest eminence.

He was another proof, of how far the black ancestors, guardians and angels, would lead any amongst those willing and conscious Muurs, Ethiopians and Nigrians, to the greatest heights of human achievement.

17 thoughts on “The Black Emperors of Rome: Emperor Philip the Arab – By Oguejiofo Annu”