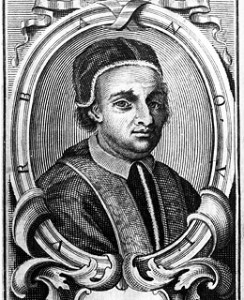 Pope Urban VI is describe in the book “Saint Catherine of Siena and Her Times” by Mademoiselle Mori as being born of a Neapolitan father and a Tuscan mother, he was short stoutly made and swarthy, with fiery black eyes. – See more at: http://www.africaresource.com/rasta/sesostris-the-great-the-egyptian-hercules/the-swarthy-kingly-lines-of-europe-moorish-kings-of-europe/#sthash.dmfmcH6m.dpuf

Here below is a painting of Pope Urban VI

The papacy of Urban VI (Bartolomeo Prignano) got off on the wrong foot. An Italian, he was elected to succeed Pope Gregory XI in April 1378 in a move intended to placate Romans bridling at the decades of French domination in the papacy. But once installed, Urban VI alienated his followers with a harsh leadership style. Thirteen French Cardinals who feared that their new leader would favor his fellow Italians fled Rome, declaring within months that Urban VI’s election was “null because it was not made freely but under fear.” On Sept. 20, 1378, they chose their own Pope, French Cardinal Robert of Geneva, who became Antipope Clement VII. The competing papacies launched the Western Schism that proved a thorn in the church’s side for four decades. If only Urban VI had played nice …