Do you know of the Roman-Catholic administered slave-house for Irish girls?

Do you know of the exploitation of Irish women overseen by the English colonial authorites?

Have you heard about the poor House of Mary Magdalene, where those women were milked, sucked, and worked to death?

Well this is the story of the Assylum of Magdalene and how it slaved almost a million Irish women over the course of two hundred years.

This notorious Assylum only closed down in 1986. The English are paying hush money, so that this chapter of disgrace is swept under the carpets. 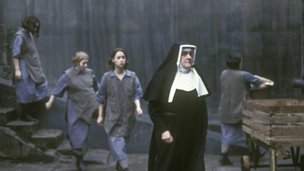 • Originally termed Magdalene Asylums the first in Ireland was opened in Dublin in 1765, for Protestant girls

• First Catholic home was founded in Cork in 1809

• Envisaged as short-term refuges for ‘fallen women’ they became long-term institutions and penitents were required to work, mostly in laundries on the premises

• They extended to take in unmarried mothers, women with learning difficulties and girls who had been abused

• Many Irish institutions, such as the army, government departments, hotels and even Guinness had contracts with Magdalene laundries

• The women toiled behind locked doors unable to leave after being admitted and while the laundries were paid, they received no wages

• The last Magdalene asylum in Ireland, in Waterford, closed in 1996