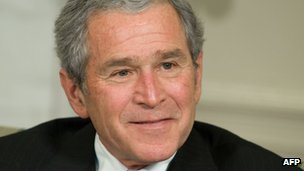 The main stream media is buzzing with news that former US president George W. Bush just went through some surgery procedure on his heart.

Poor guy. He must be the loneliest guy on earth. He damn well approaches the statues of the most hated guy on the planet earth.

Personally I feel for George W. eventhough he organized an unneeded Iraqi war. I believe he was trying to keep fundamental Muslims in check. Fundamentalist be they Christians or Muslims or Jews are very nasty people.

But war is not the answer and was never the answer. The downfall of Bush was that at a time when America was the unchallenged global mistress of sorcery and magic, when its weapons of war had become food, music, movies, culture and western lifestyle, when it conquered nations with seduction and fornications, George chose to wage a primitive type of war, a by-gone type war, a war of bullets and blood on Iraq.

And it ended with a whimper, unlike other past primitive wars when victors would stand and roar over the carcasses of their perceived enemies. Iraqi war ended, if it ever ended in confusion, contrition, recriminations for America.

The war had no objective, so it could not be won. In the end America fled Iraq. If the invasion of Iraq was ever a victory, it was a pyrrhic victory if such ever existed.

Geroge W. is universally hated for that war. And also for the hurricane Katrina inaction and bungled distress response by his administration leading to the death of many so-called black people in New Orleans, the old city.

The news media say the operation on George W. was a success. Nobody asked what it was that broke his heart or plugged his soul in the first place. Guilt.

Guilt is a depressing and fearsome yoke. The poor man walks with an unbearable burden of the guilty every moment of his lonely life. Its a terrible price to pay. I don’t wish it on nobody.

They say he is going home soon. Many of the dead of Iraq and New Orleans won’t be going home in any event.

George W., I wish you well in your remaining portion of life. I don’t know if my wishes will make any difference in your karma, but so it goes, I must wish you well. Humility so requires that. I cannot sit in judgement over you, neither can no man.

But your works will judge you daily. History as you even once said, will be your everlasting arbiter for better or for worse.