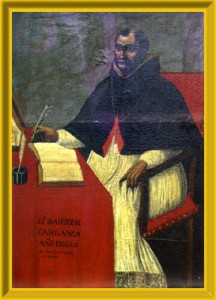 William Robertson states in the Book “The Reign of Charles V, Vol 3, pg 441 –

At noon Bishop Carranza, Archbishop of Toledo, who had long been expected arrived at Yuste. He was the same ‘black friar’ – so called from his swarthy visage-.

Bartolomé Carranza was born in 1503 and died in 1576. He entered the Dominican Order in 1520, studied theology at Salamanca.

He was the author of a sermon preached before Queen Mary of England and King Philip I of Spain titled, “Little Treatise on how to attend Mass” (1555).

As the archbishop of Toledo, he was among the luminaries in the elite class that then ruled Europe after the fall of the European branch of the Moorish Empire.

As you can see, he was a Black European Spaniard Christian cleric. He was what you would call a Moor. The original whites (landlords) of Europe.

Below is the abstract of a translation of his sermon “Little Treatise on how to attend Mass,” originally preached at Whitehall, London, in the first week of Lent, 1555, before King Philip I and Queen Mary I of England.

Published Abstract: “Presented here is the first English and annotated translation of the Spanish sermon on congregational participation in the Mass delivered by the Dominican Friar, Bartolomé Carranza. It was originally preached at Whitehall, in the first week of Lent, 1555, before King Philip I and Queen Mary I of England. The text was subsequently written down by the preacher at the request of one of those present, the Duke of Medinaceli, and published in Salamanca and Antwerp. After a lengthy historical introduction, bolstered by quotations from Scripture, papal and conciliar documents, as well as from the writings of patristic and medieval theologians, the text is divided into three parts, which reflect the phases of the liturgy. The first covers the service from the entrance of the celebrating priest to the Preface of the Canon of the Mass; the second continues up to the recitation of the Lord’s Prayer, and the third discusses the conclusion of the Mass. Then follows a short guide to help worshippers unfamiliar with Latin to participate as fully as possible in the service. Carranza rejects the medieval practice of bringing private prayer books to church for use during Mass, and instead urges full participation, as far as the rubrics of the liturgy permit, in the activity of the priest and his assistants at the altar. He also expresses a preference for frequent communion by the laity, which some Catholic reformers were advocating in the mid-sixteenth century. Although first preached in England, the published text was evidently as much directed at the Spanish market, where the writer evidently hoped that a reform of Catholic practice would help stave off Protestantism as well.”

And since we mentioned Philip II of Spain, it will be informative to post the image of this twany-moorish son of a blackamoor, and King of Spain, who caused so much damage to the land of Africa, the sacred home of the Moors, due to his confused religious ideology and poor sense of self…. 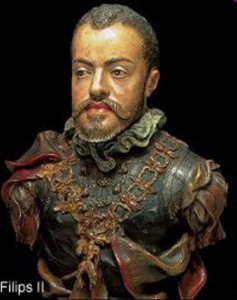