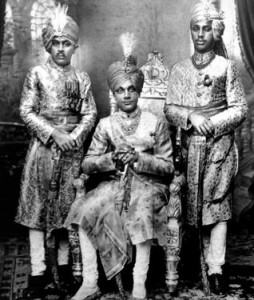 Gujarat is not only home to the lost city of Dwarka, but also houses another secret heritage — African kings in India.

Till date, two dynasties of African kings live on in the former princely states of Sachin and Janjira.

The exhibition “Africans in India — A Rediscovery”, on view at the Southern Regional Centre of the Indira Gandhi National Centre for the Arts (IGNCA), remembers their forgotten legacy. The exhibition has been curated by Dr. Sylviane A. Diouf and Dr. Kenneth X. Robbins of the Schomburg Center for Research in Black Culture, part of the New York Public Library.

The exhibition reveals how the African legacy in India begins even before the Mughal period in the 1400s. Migrating from East African regions around Ethiopia, Eritrea and Somalia, Africans rose up the social ladder to become generals, commanders, admirals, prime ministers, rulers and architects, largely known as Sidis or Habshis.

According to Mangalam, this aspect of heritage isn’t widely known because of lack of information and research. “Even this exhibit, according to curator Sylvianne is only a fraction of the material lying scattered,” she adds. …

The exhibition showcases the role played by the Africans in four major kingdoms in the regions of Bengal, Deccan, Sachin and Janjira.

Some of the most famous African rulers were Prime Minister Ikhlas Khan who was Prime Minister and Commander-in-Chief for the Bijapur Sultanate, Malik Ambar, who was regent and Prime Minister in the Deccan and the Nawabs of Janjira and Sachin.

The forts, mosques, mausoleums and other physical testimonies to their skills as city planners, architects and rulers, can still be found in these regions. There were also some famous African queens, Mehr Lekha Begum Sahiba, Yasmin Mahal and Bamba Muller. “… Africans in India are an indelible part of the country’s history and heritage. We need to do more research and come up with such good exhibitions, research papers and publications,” says Dr. Mangala.

The exhibition was also taken to UNESCO in Paris, IGNCA New Delhi, National Science Center in Surat, M.S. University in Baroda and Gujarat National Law University in Ahmedabad. It was also shown at the India Africa Forum Summit in New Delhi.

The exhibition will be on view till until December 26 at the IGNCA-Southern Regional Centre (SRC), Kengute Circle, Magadi-Kengeri Ring Road, Near IIPM, Mallathalli, Jnanabharathi Post, Bengaluru.