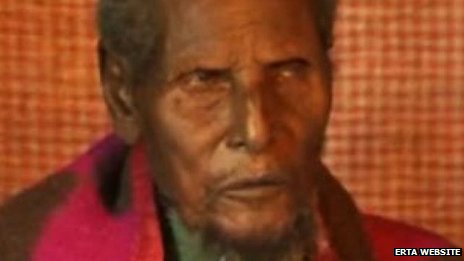 Retired farmer Dhaqabo Ebba, the grand old man is said to clearly remember details of the first Italian war of aggression against Ethiopia. Ethiopia was then ruled by Emperor Menelik, an Uncle to Emperor Haile Selassie. In that war, the Ethiopian armed forces led by Emperor Menelik II defeated the Italians. This was in 1895.

In 1895, the grand old man was already married with two wives. He had a son old enough to herd cattle at that time.

According to the reports, this man provided so much minute details of that period around 11895 that the earliest one could calculate his real age was between 140 to 160 years.

Though there is no documentary proof of his real age, his story is corroborated by material and documentary evidence of the said period, as well as the confirmation of his neighbours and fellow villagers.

As the oldest man in his region where records are passed and kept orally, he is a living library and an encyclopaedia of cultural and scientific knowledge of the folks of those times.

This man might possibly be the oldest man in Africa and the world.

The Oldest Man in the World