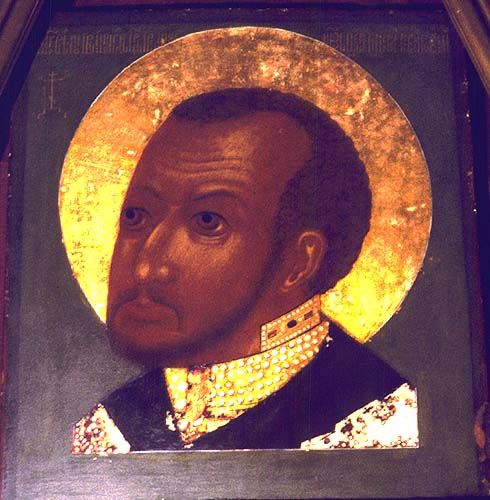 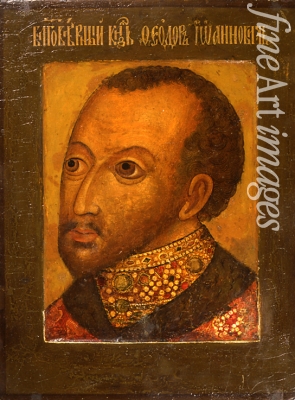 Tsar Ivan the Terrible Father of Tsar Fedor I 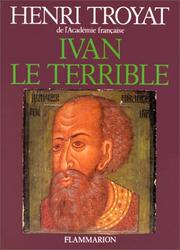 Saint Empress Helene, Tsarina and others

Icon depicting The Cross of Kiy, a replica of the True Cross with holy relics commissioned by Nikon, Orthodox patriarch of Moscow, in 1656. On the left are the images of Saint Emperor Constantine the Great, Tsar Alexey Mikhaylovich and Patriarch Nikon. To the right: Saint Empress Helena and Tsarina Maria Ilyinichna. Maria Ilinichna was a younger daughter of the noble Ilya Danilovich Miloslavsky. In 1648 tsar Alexis I of Russia reached the age required for marriage. The tsar was to choose his bride among hundreds of noble girls. The selection was managed by tsar’s tutor Boris Morozov, who arranged the tsar’s marriage to Maria, himself marrying her sister Anna. Another tsarina’s sister, Irina, married Prince Dmitry Dolgorukov.

The weddings brought much power to Morozov and especially Ilya Miloslavsky, who was made boyar and was one of the most powerful courtiers between the wedding in 1648 and his own death in 1668. The marriage was described as happy. Maria was described as beautiful, but there was also a rumour that Maria was a witch with a goat foot who could master sorcery.[1] Maria died several months after her father. When she died, it was first believed, that her widower would never remarry.

[edit] FamilyMaria had thirteen children but only two sons survived infancy: the future tsar Feodor III of Russia and the future Ivan V of Russia, who co-ruled with his half-brother Peter I of Russia. Maria’s granddaughter became Empress Anna of Russia. Maria also had six surviving daughters. The third daughter, Sophia Alekseyevna became regent of Russia during the minority of Peter I. Her last descendant Catherine Antonovna of Brunswick died in 1807, ending her line.

Maria’s sisters died childless. A distant cousin, Solomonida Mikhailovna Miloslavskaya, however, married Andrey Vasiliyevich Tolstoy, becoming the ancestor of the later Tolstoys. In the 20th century, the senior of her descendants was authorized by Nicholas II to add the name of the long-extinct Miloslavskys to his surname. His posterity has been known as the Tolstoy-Miloslavskys. According to the Oxford African American Center:

“From the eighteenth century, when Peter the Great first recruited black soldiers and civil servants, until the post-Soviet present, black people have been in the lands that once comprised the Russian empire and, later, the Soviet Union.

There were even black enclaves in the Caucasus…

As early as 1858, the celebrated black Shakespearean actor Ira Aldridge beguiled Russian audiences with the power of his performances, while his presence sparked heated discussions on racial issues in the Russian press.

In the decades preceding the 1917 Bolshevik Revolution, a number of American blacks went to Russia, where they pursued successful careers as businessmen and diplomats.”

BLACKS IN RUSSIA…MORE THAN JUST AN HISTORICAL FOOTNOTE:

One of my favorite Civil War historians was Thomas Chester Morris, the African American war correspondent for the Philadelphia Press. He visited Russia and dined with the Imperial Family.

Jamaican born Mary Seacole was a nurse in the Crimean War.

Nancy Gardner Prince, born in 1799 wrote about her experience at the Russian court. She married a servant Nero, who served Tsar Alexander I and Nicholas I.

Lastly, my book by Massie “Nicholas and Alexandra” (1967) doesn’t mention where Jim Hercules came from. I reviewed Massie’s footnote. It also mentions as a source Ian Verres, author and art historian of (Grand Duchess Olga Alexandrovna)

At the beginning of the Russian Revolution Jim Hercules would have been 50 years old.

I would be very pleased to read primary sources on Jim Hercules. In the meantime, my interest in the history of people of African descent Russia continues.

2 thoughts on “The Black Kings and Royalties of Kiev Russia”