What happened to the Black European? 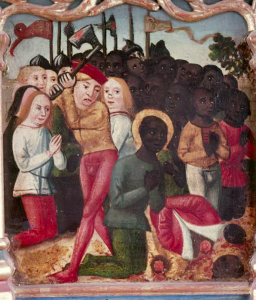 So-called Martyrdom of Saint Maurice and the Theban Legion

The black European bleached out by mixing with pale Slav and Goth immigrants from Central Asia. Many white European are not really white they are bleach out black people. Black and mulato European became a strong minority (40%) in Europe after the large migration of pale central Asian to Europe in the 6 cent CE. Pale Central Asian became 60% of the population.

The white masses uprising in the French revolution (as well as numerous unreported genocides) and the degradation of black in the African slave trade forced the black nobilities of Europe and the black European masse to mixed with the white European in order to bleach out.. Many dark skin European live in South Spain, South Italy, Romania and Bulgaria.

7 thoughts on “What happened to the Black Europeans? – A Response from Mena7”