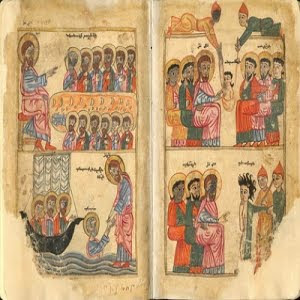 The Armenians and Ethiopians actually share DNA in large amounts. There are studies which prove there was a migration of Kushites into Eurasia and there were prehistoric back migrations from Asia into Africa.

“Notably, 62% of the Ethiopians fall in the first cluster, which encompasses the majority of the Jews, Norwegians and Armenians, indicating that placement of these individuals in a ‘Black’ cluster would be an inaccurate reflection of the genetic structure. Only 24% of the Ethiopians are placed in the cluster with the Bantu and most of the Afro-Caribbeans.”

Armenians have also been known for at least 1000 years as the Amalekites of the bible which were present in North Africa and Southern Arabia and were said to have migrated north and settled in present day Armenia. The Armenian DNA Project found that we do in fact carry large amounts of Haplogroups J1 and J2 along with the R1B1A

Armenians and dark skinned north-Africans most likely birthed the entire middle east as we know it today.

“Henry Field suggested that Arabia’s current ethnography is the result of the mixing of two distinct basal stocks: The dolichocephalic (long-headed), dark-skinned Mediteranean/Eur-African and the brachycephalic (round-headed) fair-skinned Armenoid. See his “Ancient and Modern Inhabitants of Arabia,” The Open Court 46 (1932): 854 [art.=847-869]. See also Bertram Thomas, “Racial Origin of the Arabs,” in idem, The Arabs: The life-story of a People who have left their deep impress on the world (London: Thorton Butterworth Ltd., 1937) 353-359; C.G. Seligman, “The Physical Characters of the Arabs,” Journal of the Royal Anthropological Institute of Great Britain and Ireland 47 (1917): 214-237.”

The Amhara seem to be more connected to Armenians than the other racial groups in Ethiopia.

“There is a considerable mass of evidence to show that there was a very close resemblance between the proto-Egyptians and the Arabs before either became intermingled with Armenoid racial elements.” Elliot Smith p. 54 The Ancient Egyptians and the Origins of Civilization, p.61 2007, earliest publication 1923.”

There is even more on page 119 of this book

27 thoughts on “The Ethiopian Roots of Armenia”