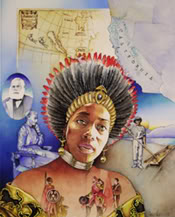 California, the land of the ever-living Muurish Empress Calafia/Califia. Calafia was the title of each empress. California was her land. She was known to be black of skin, of the muurish nationality, and ruled over Islands and Islands of black people, from California, Baja, to Hawaii.

A muurish Island, ruled by women. It was first mentioned in the records of the western European christians in the seventh century, and retold “The Song of Roland” where a passing mention of a place called Califerne, was made perhaps because it was the caliph’s domain. See (Putnam, Ruth (1917). Herbert Ingram Priestley. ed. California: the name. Berkeley: University of California)

Spanish conquistadors told stories about a mystical black muurish queen that ruled a State of California, situated in the same location as the present day California. The modern state of State California continues the legacy and the memory of this great black Queendom and its Queens. 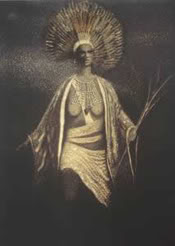 The Muurs and Calafia

The story of Calafia was later re-narrated in the book The Adventures of Esplandián, a book written in 1500, probably based on stories gleaned from the old Muurish seamen of Spain, Portugal, Holland, Belgium and England.

Calafia is introduced as “… a regal Muurish black woman, courageous, strong of limb and large in person, full in the bloom of womanhood, the most beautiful of a long line of queens who ruled over the mythical realm of California.”

She supposedly commanded a fleet of ships with which she ruled and maintained peace in the surrounding lands, and islands including Baja and Hawaii. She reportedly kept an aerial defense force of “griffins”, and other fabulous animals which were native to California, trained to defend the land against invanders.

She was so powerful she could project her imperial power over the seas of the mediteranean at will. The Esplandian narrates that Calafia maintained cultural and trading contacts with the Muurs of Africa. It told of her wars in the mediterranean seas, in Anatolia, the Byzantine empire and in southern Europe. See http://en.wikipedia.org/wiki/Calafia#cite_ref-Sabir2004_23-1

According to the author of The Adventures of Esplandián:

“Know ye that at the right hand of the Indies there is an island called California, very close to that part of the Terrestrial Paradise, which was inhabited by black women without a single man among them, and they lived in the manner of Amazons. They were robust of body with strong passionate hearts and great virtue. The island itself is one of the wildest in the world on account of the bold and craggy rocks.”(Putnam, Ruth (1917). Herbert Ingram Priestley. ed. California: the name. Berkeley: University of California)

The crusader and conqueror of the territory of California Hernán Cortés and his men were familiar with the book. Cortés quoted liberally from the book and it did have an influence on his decision to look for the Island of California. As governor of Mexico he sent out an ill-fated expedition of two ships, one guided by the famous pilot Fortún Ximénez. That expedition did not fare well at all and most of the ships and the men were lost.

In 1535, Cortés led an expedition back to the land of Calafia or California, and decided to re-named it Santa Cruz. However, that name did not stick, as the natives, and the Muurs and the black Indians and red Indians and so-called whites continued to use the ancient and old name of the land “California”.

Cortes himself and his contemporaries appeared to have used the name too. In 1550 and 1556, the name appears three times in reports about Cortés written by Giovanni Battista Ramusio.

Thus over the years of increasing conquest, colonization and rape of the land of California, the ancient land of the muurs has held onto its name and identity, in the knowledge that one day, it will be as it was in the beginning.

The show displayed a 1936 treatment of Lucille Lloyd’s “California Allegory” triptych, with Queen Califia as the central figure. Templeton said that “Califia is a part of California history, and she also reinforces the fact that African Americans had always been in California. See, Sabir, Wanda. “Wanda’s Picks”. San Francisco Bayview. Retrieved January 2, 2011. http://sigidiart.com/Docs/WandasPicksCalifia.htm

“Califia is a part of California history, and she also reinforces the fact that when Cortes named this place California, he had 300 black people with him. And throughout the whole Spanish-Mexican war, 40 percent of the population was black.” .

Templeton pointed out that most of the navigators on the explorations to the New World were African, because Africans knew how to get the New World.

For instance, Columbus had a black navigator. Muurish (black) folks had been going back and forth between Africa and America from the dawn of time. All they had to do was get in the wind right off the West Coast of Africa.

A Muurish (African) Emperor Abu Bukari took 1,000 ships to the New World in the 1300s. So Muurish navigators and sea men were highly sought in those days that the previously land-bounded Europeans were in their infancy in navigational and maritime sciences.

A black man used to own the San Fernando Valley. That was Pio de Jesus Pico (1801-1894). He was also the last Mexican governor of California. In total, in the 1800s, there were atleast four black governors of the state of California. See Sabir, Wanda. “Wanda’s Picks”. San Francisco Bayview. Retrieved January 2, 2011 http://sigidiart.com/Docs/WandasPicksCalifia.htm

Dr. William E. Hoskins, director of the museum, said that very few people know the story of Queen Califia. He said, “One of the things we’re trying to do is let people have the additional insight and appreciation for the contributions of African Americans to this wonderful country and more specifically to the state of California”. See Sabir, Wanda. “Wanda’s Picks”. San Francisco Bayview. Retrieved January 2, 2011 http://sigidiart.com/Docs/WandasPicksCalifia.htm