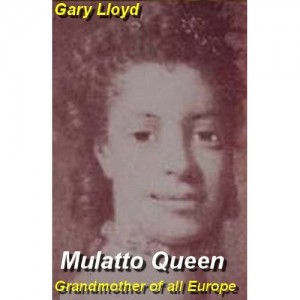 Queen Charlotte’s possible ancestry remains a hotly debated topic in Art History. Charlotte was queen well after colonialism, chattel slavery, and racism were very much part of European society. Charlotte was considered “plain” because of her features. This is a marked difference from descriptions of Phillippa of Hainault, a previous black Queen, who was described by an envoy in 1321, “…all her limbs are well set and unmaimed, and nought is amiss so far as a man may see. Moreover, she is brown of skin all over, and much like her father, and in all things she is pleasant enough, as it seems to us.”

Although some art historians seem to think the idea that Charlotte was Black preposterous for no particular reason other than because people weren’t racist enough about her appearance, it seems as though there is certainly precedent as well as contemporaneous sources for believing that she is:

Queen Charlotte, wife of the English King George III (1738-1820), was directly descended from Margarita de Castro y Sousa, a black branch of the Portuguese Royal House. The riddle of Queen Charlotte’s African ancestry was solved as a result of an earlier investigation into the black magi featured in 15th century Flemish paintings. Enough evidence was accumulated to propose that the models for the black magi were, in all probability, members of the Portuguese de Sousa family. (Several de Sousas had in fact traveled to the Netherlands when their cousin, the Princess Isabella went there to marry the Grand Duke, Philip the Good of Burgundy in the year 1429.)

For the initial work into Queen Charlotte’s genealogy, a debt of gratitude is owed the History Department of McGill University. It was the director of the Burney Project (Fanny Burney, the prolific 19th century British diarist, had been secretary to the Queen), Dr. Joyce Hemlow, who obtained from Olwen Hedly, the most recent biographer of the Queen Charlotte (1975), at least half a dozen quotes by her contemporaries regarding her negroid features. Because of its “scientific” source, the most valuable of Dr. Hedley’s references would, probably, be the one published in the autobiography of the Queen’s personal physician, Baron Stockmar, where he described her as having “…a true mulatto face.”

Charlotte, North Carolina in the United States is named after Queen Charlotte.

3. Frances Cotes, 1767. Lady Mary Coke called the likeness “so like that it could not be mistaken for any other person”