Spread the love
Marcus Opellius Macrinus (ca. 165 – June 218), commonly known as Macrinus, was Roman Emperor from 217 to 218. Macrinus was of Berber descent and the first emperor to become so without membership in the senatorial class

Born in Caesarea (modern Cherchell, Algeria) in the Roman province of Mauretania to an equestrian family, Macrinus received an education which allowed him to ascend to the Roman political class. Over the years he earned a reputation as a skilled lawyer. Under the emperor Septimius Severus he became an important bureaucrat. Severus’ successor Caracalla appointed him prefect of the Praetorian guard. While Macrinus likely enjoyed the trust of Caracalla, this may have changed when, according to tradition, he was prophesied to depose and succeed the emperor. Rumors spread regarding Macrinus’ alleged desire to take the throne for himself. Given Caracalla’s tendency towards murdering political opponents, Macrinus probably feared for his own safety should the emperor become aware of this prophecy. According to Dio, Caracalla had already taken the step of re-assigning members of Macrinus’ staff.

In the spring of 217, Caracalla was in the eastern provinces preparing a campaign against the Parthian Empire. Macrinus was among his staff, as were other members of the praetorian guard. In April, the emperor went to visit a temple of Luna near the spot of the battle of Carrhae, accompanied only by his personal bodyguard, which included Macrinus. Events are not clear, but it is certain that Caracalla was murdered at some point on the trip (perhaps on April 8). Caracalla’s body was brought back from the temple by his bodyguards, along with the corpse of a fellow bodyguard. The story as told by Macrinus was that the dead guard had killed Caracalla. By April 11, Macrinus proclaimed himself emperor. Macrinus also nominated his son Diadumenianus Caesar and successor and conferred upon him the name “Antoninus”, thus connecting him with the relatively stable reigns of the Antonine emperors of the 2nd century.

Some faked images of Macrinus (Watch the nose): 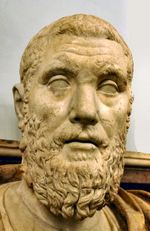