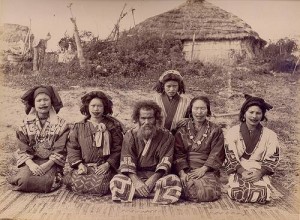 “At about 35,000 B.C. a group of African Mongoloids; later known to us as the Jomon, took this route and entered Japan, they became the first Humans to inhabit the Japanese Islands. Later, another group; Known to us as the Ainu, followed. Oddly Indians were Not part of this group. Today, their genes can still be found in 40% of modern Japanese, as well as Mongolians and Tibetans…”