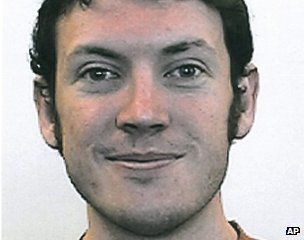 The gunman James Holmes, 24, was a neuroscience PhD student at University of Colorado-Denver until dropping out last month

One of the injured was just 3 months old, hospital workers said.

The shooting unfolded inside a darkened theater packed with Batman fans, some in costume for the movie’s premiere. Screaming, panicked moviegoers scrambled to escape from the black-clad gunman, who wore a gas mask and randomly shot as he walked up the theater’s steps, witnesses said.