The Goje is a one string fiddle from Nigeria. Snakeskin covers a gourd bowl to create a membrane head similar to that of a banjo. Horsehair strings are suspended on a bridge. The Goje is played with a bow…

In Ethiopia and Eritrea, one finds similar traditional fiddles that are played exactly like the violin and which produce similar sounds.

These traditional fiddles come from stone-age Africa. Before the first modern Europe was born, before any of the famous million dollar fiddle manufacturers were ever conceived, fiddles, the famous violins, have been created and used widely right across the African continent.

Fiddles probably came into Europe by way of the waves of Moorish incursions which implanted their populations and culture in the European landscape, ages ago. 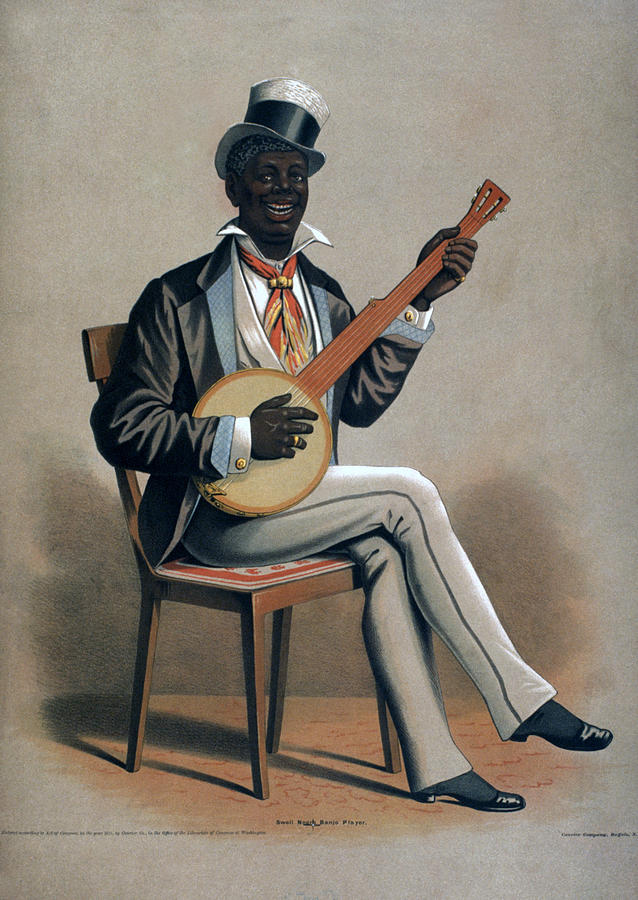 Banjo is a musical instrument which had was invented and widely used in ancient Mauritania, the Sahel and the Coast of Guinea.

The Moors of West Africa, the Mauritanians, the so-called Negros who had been forcibly brought to the Americas subsequently re-created the Banjo, this West African musical instrument which is very similar to the North African Moorish guitarro.

According to Thomas Jefferson in 1781: “The instrument proper to them (i.e. the slaves) is the Banjar, which they brought hither from Africa.”

Banjo was the instrument widely used in American folk music until after the depression of 1929, when historians remarked that its happy notes were replaced by the more sombre notes of the guitar.

The Krar harp or one of its variations later developed into the guitarro, the direct ancestor of the guitar which was used widely in ancient Mauritania, later known as the Maghreb, the Sahel and Guinea.

Guitarro was introduced to Spain by African Moors in the 9th century AD. They used it for their music and soon the whole of Spain, southern Italy, southern France, became avid acolytes of guitarro culture.

When the Moors fell from power, guitarro had already become an integral part of Iberian music.

The Moors many of whom migrated to the Americas brought their guitarro with them.

Guitarro was widely played in the Spanish colonies since it was the Spaniards and the Portugese that conquered and shared the Moorish lands in America between them.

Alghough widely played in the latin territories of America in the 17th and 18th century, it was only known in the southern region of the United States in the 19th century. Its use was not widespread until the early 20th century when it was used by popular professional musicians like the Carter Family and Jimmie Rodgers.

Therefore, the use of the guitar in the recorded selections was probably a relatively recent innovation.

Rhythm and drumming dominates popular modern popular music. One cannot get more African than drumming and rhythms. Drumming is an ancestral tradition long central to any concept of African music.

Drums and drumming may have come into Europe in the times of the Iberians who originated from Africa. According to one source: “It’s possibly a inheritance of the Iberians who were of North-African origin and related to the nowadays called Berbers, Tuaregs and other Hamitic peoples: people with a culture and music wherein drums and drumming also play an important role. ” See http://members.fortunecity.com/michel_conci/spmu.htm

The last set of North African moors that had any meaning overlordship of Europe lasted between 740 AD and 1492 AD. In that time, Moorish drumming and rhythm was widely practiced in the Iberian pennisula to the point where it became a fixed part of the musical landscape.

The Moors who had migrated or fled to the Americas ahead of the later Christian onslaught had also introduced their musical instruments including drumming in the Americas.

When the European exiles arrived, they also came with the legacy of Moorish music, including drumming, that had been bequeathed to Europe by the Africans.

The West African Moors who were forcibly brought to Americas introduced West African patterned drums and rhythms into Americas. This type of drumming was much dreaded by the class of the exploiters who quickly made the playing of drums a capital offense in most of the Northern colonies. That did not stop the rhythms as drumming sessions continued in secret, as well carried on the playing of other instruments like the piano, the banjo, the guitarro, even the flute.

It is said that whenever black people play their music, no matter what instrument they use, they bring in the rhythms. These are the rhythms of the West African Moors which jumped across time and space and transmuted into other practices, notes and scales.

The Piano comes from the Dulcimer an old African musical instrument:

A damsel with a dulcimer
In a vision once I saw;
It was an Abyssinian maid,
And on her dulcimer she played,
Singing of Mount Abora.

The hammered dulcimer is a stringed musical instrument with the strings stretched over a trapezoidal sounding board. Typically, the hammered dulcimer is set on a stand, at an angle, before the musician, who holds small mallet hammers in each hand to strike the strings (cf. Appalachian dulcimer). The Graeco-Roman dulcimer (sweet song) derives from the Latin dulcis (sweet) and the Greek melos (song). The dulcimer, in which the strings are beaten with small hammers, originated from the psaltery, in which the strings are plucked.[1]

According to Encyclopadia Britannica vol 11: The origin of the dulcimer is remote, and must be sought in the East. In the bas-reliefs from Kuyunjik, now in the British Museum, are to be seen musicians playing on dulcimers of ten strings with long sticks curved at the ends, and damping the strings with their hands. This is the pisantir of the days of Nebuchadrezzar, translated “psaltery” in Dan. iii. 5, &c., and rendered “psalterion” in the Septuagint, a confusion which has given rise to many misconceptions.

llustration from an Ethiopian manuscript psalter, depicting King David with a harp

The Gimbri and the Double Bass/Bass Guitar

The gimbri is constructed from walnut wood and skin from the throat of a camel, it looks and sounds a bit like an ancient African bass guitar. It is a living artefact stilled played by the descendants of the Moors in today’s Morocco and much of North Africa. It was introduced in Europe by these ancient African Moors.

It was part of the innovative musical traditions that the Moorish musicians brought to Europe in the 15th century. It is also called a bass Violin.

In the 1930s, musician and inventor Paul Tutmarc from Seattle, Washington, developed the first electric string bass in its modern form, a fretted instrument designed to be held and played horizontally. It was marketed as “Model 736 Bass Fiddle”.

In the 1950s, Leo Fender, with the help of his employee George Fullerton, developed the first mass-produced electric bass.

5 thoughts on “The African Origin of the Modern Musical Instruments: From the Fiddle to the Guitarro”