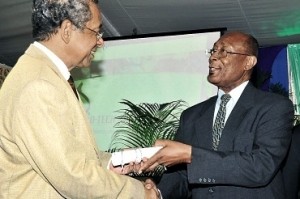 JAMAICAN scientist Dr Henry Lowe last night threw a lifeline to men worldwide when he announced that he had developed a formula that can reduce and eliminate prostate cancer, the number one cause of cancer deaths among males.

“I am pleased to announce that we have reached the final stages in the development of the Alpha Prostate Formula, which will be on the market in the next three months under the Eden Gardens brand,” Dr Lowe told guests at the launch of Bio-Tech R&D Institute at the Terra Nova Hotel in Kingston.

Lowe, executive chairman of Environmental Health Foundation which is based at his Eden Gardens complex in Kingston, explained that the formula will be locally produced, first as a nutraceutical.

“The drug takes time and millions of US dollars to develop, so that is why we’re making it available in its semi-purified form,” Dr Lowe told the Observer in an interview outside of the launch.

Dr Joseph Bryant from the University of Maryland Medical School and a shareholder in Bio-Tech R&D Institute, agreed. “We have to go by the rules and the regulations as to how fast we can get it out there, but the nutraceutical thing now allows us to get it out much faster,” he told the Observer.

“We cannot overemphasise the point of what this means for the country, and I hope that the younger generation will carry it on,” Dr Bryant added.

Lowe’s cancer research work attracted world attention when he announced that he had found properties in the Jamaican ball moss that had the potential to fight cancer.

Yesterday, he said that the formula is derived from the main ingredient in the ball moss and has been shown to have major prostate anti-cancer activity.

Jamaica has one of the highest prostate cancer rates in the world with approximately 150 men diagnosed each year. Medical experts believe that a large percentage of affected men are undiagnosed.

Yesterday, Lowe, who won the Observer Business Leader Award for 2006, noted that in addition to Jamaica, numerous cases of prostate cancer have been reported among black Americans and Africans.

“The market for that is tremendous and there are only two other products as nutraceuticals for this,” he said. “This is going in there, brand Jamaica, and if we get the right thrust and the right support we have hundreds of millions of US dollars which can come to Jamaica.”

Yesterday, in his prepared remarks, Lowe said that as a first step in the development of the nutraceutical industry, Bio-Tech R&D Institute has already secured capital of $25 million, which will contribute to the overall development of the institute in the next 24 months. Further capitalisation of $25 million is expected within the next 48 months.

“As a result, the only thing that could impede success is our will to succeed,” said Dr Lowe.

“We will be working toward seizing a five per cent share of the global nutraceutical industry within the next two years, which translates to a multi-billion-dollar local industry — approximately $726 billion,” he said.

The Bio-Tech R&D Institute brings together Jamaica’s four leading research institutions — the University of the West Indies, University of Technology, Northern Caribbean University and the Scientific Research Council — all of which will receive 2.5 per cent of the total shares of the institute free of cost.

In addition to his other shareholders — Federated Pharmaceutical/Lascelles Limited and the Environmental Health Foundation — Dr Lowe said he has forged a partnership with the largest nutraceutical company in China, which will distribute the formula in that Asian country.

“We expect that gaining even one per cent of the Chinese market will amount to tremendous US dollar value export earnings — perhaps the most rewarding endeavours and investments in our country in recent times,” said Dr Lowe.