The story of Good King Wenceslaus appear to be a subliminal throw-back to the story of ancient Egyptian Osiris, the God/King who was devout to the gods and dedicated to the well being of his country men.

Osiris was eventually killed by his brother jealous brother Seth who invited Osiris to a banquet where he later had him killed and caught to pieces.

The only difference in the St Wenceslaus story is that Isis the Magical lady, the wife of Osiris raised him from the dead like Mary Magdalene raised Jesus from among the dead.

The story of Good King Wenceslaus is now a national myth of the Czech and the Slovenians. The good king is the patron saint of all the Slavs.

And he was one of the original aborigines of central Europe known as Nigri Latinis or the Morlachs, among the earliest of christians before the invasion of his country by so-called white Serbs, and slavs who were savages and pagans.

Good King St. Wenceslaus, duke of Bohemia, was born about the year 907 at Prague, Bohemia (now the Czech Republic). His father was killed in battle when he was young, leaving the kingdom to be ruled by his pagan mother.

Wenceslaus was supposedly educated by his grandmother, Ludmilla, also a saint. She taught him to be a Christian and to be a good king and left him with a deep commitment to the Christian faith.

Wenceslaus was eighteen years old when he succeeded his father to the throne. He worked in close cooperation with the Church to convert his country.

He ended the persecution of Christians, built churches and brought back exiled priests. He sought to govern his country as one, caring for both the Nigri-latini (black latins) aboriginals of his realm as well as the pale skin homeless imigrant slavs who were then flooding his kingdom with their population.

As king he gave an example of a devout life and of great Christian charity. Everyone who knew him called him the “Good King” of Bohemia.

His brother Boleslaus, however grew jealous of him. One day he invited Wenceslaus to his house for a banquet which was only a rouse to have the good king killed.

The next morning, on September 28, 929, as Wenceslaus was on the way to Mass, Boleslaus followed him and struck him down at the door of the church.

That was a tragic and unforgivable betryal, yet before he died, Wenceslaus forgave his brother and asked God’s mercy for his soul.

He is listed as a martyr since his murder was connected with his faith, piety and kindness.

This Nigri latini (Black Latin) king, martyred at the age of twenty-two, is today the national hero and patron of the virtually pale-skin dominated Czech and Slovakia Republic.

Today, Nigri Latini King Wenceslaus is held to be the first Slav to be canonized. 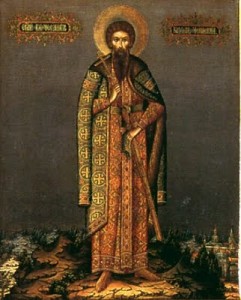