Crom Dubh of the Celts 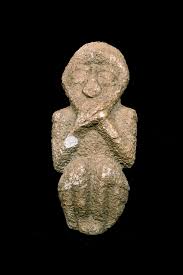 There was the first god of Ireland, an Ethiopian Muur, by the name of Crom Dubh, whose cult came from Africa, who just couldn’t be church-washed nor white-washed easily, so he was supposedly suppressed, erased and buried. If only they could. Because the black god rises again and again like the true Phoenix.

He once enjoyed the unreserved worship in Ireland and other Celtic countries, before the church and tribal wars brought about the cultural and ethnic genocide of old Europe.

His name as seen already was Crom Dubh, the ‘dark, stooped one’ who lived in the underworld throughout winter, emerging on 1st August to claim the ‘first fruits’, in the form of Eithne the corn maiden, and bringing her on his back (hence his stoop) down to the underworld.

Crom Dubh Muurish High God of the Celts:
According to Michael J. O’Kelly, Crom Dubh was the chief Celtic idol of Ireland. His chief shrine was located on Magh Slécht (The Plain of Prostrations) in County Cavan, surrounded by twelve other gods.

It is said his cult was introduced by the earliest settlers of Ireland, who were known as the Fomorians (Muurs). They supposedly came from Africa via Spain.

The megaliths were also associated with his cult of devotees. Africa is incidentally a continent defined by megaliths and obelisks, dating back thousands of years.

According to one source, “the two surviving pieces of the Killycluggin stone are believed to be or related to Crum Dubh. They are now in the National Museum of Ireland. The 12th century Book of Leinster, relates this site to Crom Cruach, where Cruach refers to a heap of any harvested or gathered food, hay, etc.

Crom Dubh may have also served as a fertility god. In later times, he came to be considered an evil god due to the influence of western Christianity which sought the suppression of the worship of Pagan deities throughout Europe.

Because he was a black deity, black like in the word Muur, (hence the descriptive “dubh”, i.e. black in his name) he was given a particularly sinister association by the Christian Church organizations who had just conquered Europe at that time. This led only to greater persecution of his devotees and almost complete destruction of his cult and memory. http://en.wikipedia.org/wiki/Crom_Dubh

Gaelic Heavenly-God of Wheat and Fertility

Crom Dubh was the Gaelic heaven-god who took many forms which came to be his motifs and symbols.

He was known to assume the form of a snake or dragon and is as nimble as a march hare. He lived by the sea at Dun Patrick: Downpatrick, Northern Ireland. His house is Dún Briste: Broken Fort.

In Africa, many powerful gods were represented as living near the sea or in the rivers. Olokun like Osiris was the god of the Atlantic Ocean. They both like Crom Dubh were represented as handsome and powerful black men. The snakes were sacred to them. Similar to how the snakes were sacred to the gods and the Pharaohs of Egypt, and the gods and Priests of India.

Crom Dubh comes up from the underworld as a handsome black man, (possible an early Moorish farmer-settler) carrying a scyth, and bringing home the bountiful harvest of wheat, a seed with which he is particularly associated.

One must recall that wheat is a grass domesticated by early African farmers who had colonized middle east, in the neolithic times, probably a people like those historians call the Natufians or the Badarians and Mushabeans. Those farmers spread the knowledge and culture of wheat farming into Europe, via Sudan, Egypt, Palestine, Anatolia, into Southern Europe.

We have seen that Crom Dubh meant “dark bent-one” (Freeman, 247.) In any event, he is believed to have brought the first supply of wheat to Ireland in a sack on his back, and that he brought all knowledge associated with it.(Freeman, supra).

Crum Dubh can then be seen as a stereotype of an African Nile-Valley, Niger-Congo fertility gods. Osiris, a Nile valley god was known as the seed of the wheat.

He was venerated as a fertility god. At the same time, he was the god of heaven. This is a stereotype that repeats itself over and over again in Africa, through Egypt, Sudan to Nigeria, Ghana and Ethiopia.

One finds this stereotype in the concept of Crum Dubh. He was both a fertility and a seed god. He was represented with seed carried on his back. He is often personified as grain. (See John Barleycorn)

His feast day is July 28th and it goes on until August 1, the high point of the feasting.

Crom Dubh and Saint Patrick – The destruction of the old order

The place of the god Crom was linked to the hill of the goddess Maebh, at Tara by a ceremonial road which facilitated devotion to both deities, the dual male/female divinity of the land.

The general population, as well as the lords, chiefs and high kings of Tara, all worshipped Crom Dubh and his queen Maebh.

The old ways persisted for centuries until they were destroyed by a new people, a new order of things which intruded on the world as the celtic people had then known it.

This new order of things is represented in the story or the parable of Saint Patrick, the one who rid Ireland of the snakes, the druids, the pagans, the bulls, and the earth religion. The joyous earthy existence of the old gaelic would henceforth be replaced by the joyless monotony of church rituals and recitations.

Saint Patrick represents the watershed of things in old Ireland. He represents the overthrow of an ancient mystical order of Muurs, known as the Druids, and the society they established.

In the ensuing destruction and conquest by the Church, the cult of Crom Dubh, the first and oldest black God of Ireland was particularly victimized. They were chased, hassled and suppressed. Their symbolisms were destroyed. Opposition or protest often meant instant death. Ethnic cleansing.

Despite the wanton destruction, memories persisted. St Patrick supposedly followed the sacred road of Tara on his mission to destroy Crom’s worship. He actually retraced the ancient pilgrimage from Tara to Crom Dubh’s Shrines.

On the way to Crom Dubh’s shrine, there are several St Patrick’s Wells. The fact that these were consecrated to Patrick signifies an intense effort to suppress the pagan practices encountered by the church there.

Those wells were obviously wells sacred and dedicated to Crom Dubh once upon a time. Interestingly enough, the annual pilgrimages to these wells are never held on St Patrick’s day, but around the time of Lughnasa on (or around) 1st August, i.e. old Crom Dubh’s day.

Legend of the modern Irish, many of mixed and dubious heritage, has it that after Patrick confronted the god he noted Crom’s good works and took possession of his soul, while putting to flight his demons and making him his servant!

He even declared that “Crom’s charities and good works were more than a balance for his sins.” It says a lot for the cultural tenacity and attitude of the Celtic church of the day.

The durability and tenacity of the old ways in Ireland are underlined by the saga of the original Killycluggin stones, one of the sacred megaliths of Crom Dubh.

The stone was vandalized many times since the first act of vandalism committed against it by Saint Patrick. Considering how many times it was moved and violated, it is a wonder that it survived at all, but it did.

These days the original Killycluggin stone is safely housed in the County museum at Ballyjamesduff. The top was damaged by St Patrick, the legend goes, but the stone itself “still exudes a very powerful earthy presence from its corner in the museum” writes Meehan in 2002.

The Cavan museum booklet dates it at circa 200 BC, saying that it has a “religious significance associated in some way with fertility”.

Fertility was the special department of Crom Dubh. More than 2000 years on, his presence can still be felt, in his new temple (the Cavan museum), where he is adored by the public, who come to feel his enduring presence.

NB: Wheat was a very important plant to the survival of the early Gaelic people. It was used in food, in drinks, in medicine, in building, i.e. thatching, and in weaving household utensiles (baskets, hats, etc).

The Voyage of Bran, Book II;

Harbison, Peter, ‘Pilgrimage in Ireland ­ the monuments and the people’, Barrie and Jenkins, UK, 1991.

McMahon, Joanne and Roberts, Jack, ‘The Sheela-Na-Gigs of Ireland and Britain ­ The Divine Hag of the Christian Celts – An Illustrated Guide’ Mercier Press, Dublin, 2001.

PLS: Dé Domhnaigh Crum-Dubh – “Crom Dubh Sunday” – is known in Ireland as the first Sunday in August, but in Lochaber is applied to Easter. It appears in the Scottish saying:

The egg association must hark back to the seeds that Crom Dubh carries and lovingly places in the Earth each year at the beginning of autumn, when farmers also sow the next year’s crop.