“Contract children” were expected to perform hard labour on the farms

A shameful chapter of Swiss history was explored in the recently released feature film about “Verdingkinder” or “contract children” or “slave children.

A common feature of Swiss life until the mid-1950s, Verdingkinder were primarily children from poor families in the cities, forcibly removed from their parents by the authorities and sent to work as slave “unpaid” labour on farms.

This is your supposedly civilized Switzerland, the heart of Europe. These were your so-called “white” children, the boomer generation, who were supposed to be the luckiest and the richest and the most pampered generation that the world ever saw.

But no, the reality was very different. 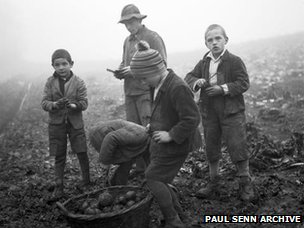 Many of those slave childern never saw their kins again after being taken away from their homes and put up in slave camps also called farm domitories.

“There, many of them were regularly beaten and even sexually abused. They had little education and consequently, as adults, little chance of making careers for themselves.

Many also found that the abuse experienced in their childhood made it difficult to establish relationships as adults – former Verdingkinder have high rates of divorce and many now live alone.”

Children were taken away from families if they didn’t live according to an abitrarily defined middle-class family model, for instance – unmarried mothers, or divorced people, or people who weren’t able to keep their money together.

The Swiss authorities took away a lot of children and placed them in agricultural environments where they were used as cheap labour and they had to work really hard.

In that era, Swiss agriculture was not mechanised, and a great deal of work had to be done by hand.

Many of those children were given very little food, and some were even forced to sleep in the cellar. Beatings were a daily event.

A quote from one of those “contract” children recounts: “In winter they sewed my trouser pockets up (so I couldn’t put my hands in them). They said, if you work, you’ll stay warm” – Werner

Cruelty existed on an institutional scale. It is a period in Switzerland’s past which even historians find hard to comprehend.

“We can explain many things when we remember that it was a poor country,” says Ruedi Weidmann.

“And some of it was moral, a way to discipline the lower classes. But the aggression against these children, that I can’t understand.”

It is thought the Swiss government is now considering some form of apology to the Verdingkinder, although no financial compensation seems likely.