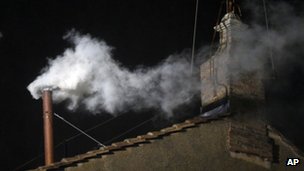 White smoke billowing from the Sistine Chapel chimney has announced to the world that cardinals gathered inside have elected a new Pope to head the Catholic Church.

The name of the new Pope is expected to be announced shortly.

He will replace Pope Benedict XVI…