An Ethiopian hero of the Korean War 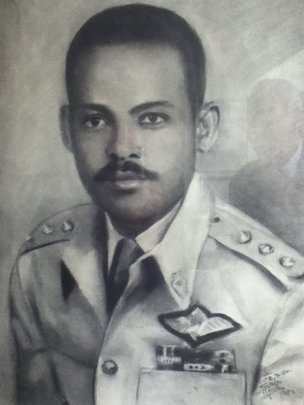 Sixty years ago, Ethiopia was at war. Not in Africa, but thousands of miles away in Korea. This is the story of one Ethiopian officer who won a US gallantry award.

In 1951, the Ethiopian Emperor, Haile Selassie, decided to send thousands of troops to fight as part of the American-led UN force supporting South Korea against the communist North and its ally, China.

They were called the Kagnew battalions and were drawn from Haile Selassie’s Imperial Bodyguard – Ethiopia’s elite troops.

Capt Mamo Habtewold, now 81 years old, was then a young lieutenant in the 3rd Kagnew Battalion. He clearly remembers a send-off from the Emperor himself, as he was about to leave for the other side of the world.

“Always when a battalion went to Korea, he came himself and made a speech and he gave each battalion a flag – and he ordered us to bring that flag back from Korea,” Mamo recalls.

When Ethiopia had been invaded by Italy in 1935 Haile Selassie had condemned the League of Nations for its failure to act. Now, as a staunch ally of the US, he was eager to practise what he had preached.

“As you know our King, Haile Selassie, was a great man for collective security. And when the UN asked him for troops for Korea, he accepted without any question,” Mamo says.

Mamo was himself keen to go, especially after the first Ethiopian battalion sent to Korea returned in 1953.
“Everyone was boasting when they came back from Korea, so everybody wanted to fight,” he says.

The Ethiopians fought as part of the US 7th Division. At the time, the American army had only just started to become racially de-segregated. But for Mamo discrimination was not an issue.

“You know Ethiopia has a 3,000-year history as an independent country. We Ethiopians were proud and boasting that we were Ethiopians. We don’t care about any colour. The Americans didn’t call us ‘Negro’ as we would be angry,” he says.

And Mamo is proud of their record in Korea.
“We were the best fighters. The three Ethiopian battalions fought 253 battles, and no Ethiopian soldier was taken prisoner in the Korean War,” he says.

“That was our Ethiopian motto: ‘Never be captured on the war field.'”

That motto was put to severe test.

In 1953, while peace talks dragged on, the two sides hoped to strengthen their negotiating position by battling for control of the barren, rocky hills and ridges which lay in front of the main UN front line.

Some of the hills had nicknames: Old Baldy, T-bone and, most famously, Pork Chop Hill. Defence of this area was assigned to the US 7th Division, which included the Ethiopian Kagnew battalion.

One night in May 1953, Mamo led a small patrol down from his hilltop outpost to scout out the land below. What he didn’t know was that his patrol was about to be enveloped in a major Chinese army assault.

“We were 14 Ethiopians and one American in our patrol. It was written later that we were fighting 300 Chinese soldiers – one man against 20,” he remembers.

Four members of the patrol were killed, including the American corporal. Everyone else was wounded.

“They tried to take my radio operator prisoner, but I killed the Chinese soldier and saved that man. And one time they came to finish us when we were all wounded, and I was left with one hand grenade and I killed them. It was very hard.”

The fighting continued on and off through the night. Cut off, his men wounded, Mamo feared they could not hold out much longer.

“I was wounded several times, I was tired, exhausted and I fell unconscious twice. The most important thing was to find a radio to contact the American artillery. But my three radios were destroyed.

“I gave one soldier my pistol to cover me while I went looking for a radio. I fainted again, and I was afraid I might be captured, I wanted to kill myself. But when I ordered the soldier to give me my pistol back, he refused, and the other soldiers said ‘Don’t give it to him!'”

So Mamo decided to fight on, after all.

“I just looked for a weapon from one of the dead men, and when the Chinese attacked I would shoot, and when it was quiet, I would look for a radio,” he says.

In the end he did find a radio. He called in American artillery which halted the Chinese attacks.

Reinforcements got through and under the cover of smoke he and his wounded soldiers were withdrawn. Back at base, Mamo was the only one of his patrol left standing.

“They all went to hospital. I was the only one who went back to the bunker. It’s like a man who is living with his family, and all the family is dead and he returns to an empty house – that is how I felt. I was so sorry. I was very depressed.”

For his actions, he was awarded Ethiopia’s highest military honour. The Americans also gave him a Silver Star for gallantry in action.

More than 3,000 Ethiopians fought in the Korean War, more than 120 were killed, more than 500 were wounded. The survivors returned to Addis Ababa as heroes.

“It was really a big day, especially when we came back from Korea, we brought back our dead soldiers. In Addis Ababa it was so crowded. Half of the crowd were weeping, half were celebrating,” Mamo says.

After the war, Mamo was promoted to captain. He was forced to leave the army in 1960 in the aftermath of an attempted to coup by members of the Imperial Bodyguard. He went on to have a career as a businessman and administrator.

This year the South Korean government announced it would give pensions to the surviving Ethiopian veterans of the Korean War. Mamo still hopes to return to South Korea one last time and see the place where he became an Ethiopian war hero.