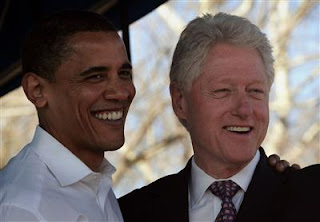 Why did 3 consecutive presidents of United States in the last 20 years meet up for in Africa in the week of June 26th, 2013?

While they distracted the world with news of Mr. Snowden spy scandal and hijacking of presidential (Bolivia’s) aircrafts by European Union countries, the two last presidents of United States meet up secretly in Africa with the current president Obama, under cover of some innocuous story.

Former US President Bill Clinton was apparently in Senegal hours before the arrival of the incumbent President Barack Obama, sources said.

The leading Le Populair daily on Tuesday quoted American embassy sources hinting that the two statesmen could likely meet during their stay in Dakar.

The sources further said that President Obama was expected to extend his visit initially billed for 48 hours to 72 hours, beginning June 26.

Even though the exact reason for Mr Clinton’s visit was not made clear, analysts said he was expected to meet political and civil society leaders “in a bid to strengthen the democratic dividends” in Senegal.

Obama supposedly went to promote goodwill and trade. Bush went to do some messianic work of healing Africans from “their pestilence”, whereas Clinton came in under cover of promoting civil society.

Then they all had a meeting.

With whom, for what? Why in Alkebulan, Ethiopian Land of the Moors?

So far so good, they have all refused to confess what they were up to. But confess they will eventually…

As the ancient Igbos would say, a toad does not run around in the middle of day for nothing.

Meanwhile, Bush and Obama met up [later that same week] in Tanzania Africa, as Obama made a diplomatic trip and Bush and wife Laura traveled to promote a “program to fight cervical cancer”.

The two leaders participated in a wreath-laying ceremony at the U.S. Embassy in Tanzania, site of a terrorist attack in 1998.

They also had a quiet meeting.

When ABC asked what he and Obama talked about, Bush joked: “What a big pain the press is.”