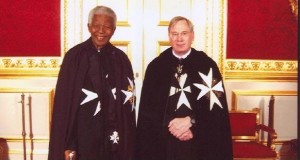 Knight of Malta Nelson Mandela with Duke of Gloucester

Who are the Knights of Malta:

The knight Malta, one of the most peculiar organisations in the world marked its 900th birthday Saturday Feb 9, 2013 with a colourful procession through St Peters Square,a mass in the basilica and an audience with Pope Benedict XVI, himself a member of the onetime chivalrous order drawn from Europe s nobility.

The order traces its history to an 11th cent CE infirmary in Jerusalem set up by a monk to care for pilgrim visiting the Holy Land.During the Crusades it took on a military role to protect pilgrims and Christendom as a whole from muslim attacks.In February 1113 Pope Paschal II recognized the order with a papal bull establishing its sovereign status by saying it was independent of both lay and other religious authoroties.

The orders international legal status is entirely unique, a sovereign a sovereign entity that prints its own stamps, coins, license plates and passports,yet has no territory over wich it rules.Its forces once occupied Cyprus, Rhodes and Malta, but Napoleon expelled the order from Malta in 1798,depriving it of the final patch of land ove it ruled.Neverthless the order still enjoys many of the trapping of a small country:UN observer status and diplomatic relation with 104 countries.

The Knight of Malta is an aid group that runs soup kitchen, hospitals and ambulance service around the globe,and a sovereign entity that prints its own passports and enjoys diplomatic relation with 104 countries yet has no country to call its own.

2 thoughts on “Knights of Malta meet in Vatican for their 900 year event, then the pope resigns”