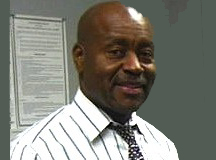 Bobby is the former Mayor of Waterproof, Louisiana and is unjustly incarcerated. There is a petition on the Color of Change.

I suspect that many of you recall in 2007 when I traveled south in search of my roots and in support of Jena 6. I took my time in my travels and made an excursion of the trip. I call it Part II of my southern trek. I stopped and visited friends and did Black History tours all across the south, including Nashville, Memphis and Jackson before heading to Jena, Louisiana. As usual, I was traveling solo. I befriended some woman who answered the phone at the hotel I where I planned to stay and she shared with me a back road route to Jena from Jackson that would be a little shorter. What she did not tell me was that I would travel through the middle of no where and often times not even have cell phone service.

As I traveled along taking in the scenery, mesmerized by the cotton crops, wanting to stop and take a picture of it, get out and pick it in honor of and in tribute to my ancestors who endured such cruelty and back breaking work simply so that I can be... I began seeing signs, "Bobby Higginbotham for Sheriff". Of course, considering the "neck" of woods I was in, quite naturally I thought it was some White guy running for sheriff in some small town. I passed one sign, then another or two before I decided that I should at least stop and take a picture of the sign bearing my name in the middle of no where. One of the benefits of having a unique last name like Higginbotham is that you take notice when you see it, when you hear it. So I turned around and just as I did, the sign now facing me had a picture of this Bobby Higginbotham. Lo and behold, Bobby was Black! So you know what I did. I ventured out to find this Bobby Higginbotham who was at the time, Mayor of Waterproof, LA. He was running for Sherriff of Tensas Parish. They don't have counties in LA, they have parishes.

It's like a scene from the 1960s — a Black mayor stepped out of line with powerful White politicians in a small Louisiana town, and it cost him his freedom. Now he's in jail due to another out-of-control District Attorney in Louisiana. Now it's up to us to help win it back.

Bobby Higginbotham, mayor of Waterproof, LA, started making policies intended to bring the town more revenue and give it more control over police matters. In doing so, Higginbotham made mistakes, but he didn't commit any crimes. But District Attorney James Paxton took advantage of the errors to arrest Higginbotham on 44 trumped-up charges and install a political ally in his place.

How to Free the Enslaved

You may be wondering why I sent you the Willie Lynch speech for discussion. The reason is that some people believe that his fear-envy-distrust methods still work today to prevent black men from being true men and to prevent black men and black women from building healthy families. There are no chains around our feet (as Bob Marley sang) but if we suffer from mental slavery, then we are not yet free from slavery. The key to freedom is therefore the mind or the awareness that we are not yet free. The speech emphasized that the way to maintain slavery is to weaken the mind of the men and keep them physically strong.

Nobody involved in the Shirley Sherrod scandal emerged with reputation intact — except, of course, for Sherrod herself. But although key players Andrew Breitbart, Tom Vilsack or Benjamin Jealous all deserve a measure of scorn, we're even more distressed by a political culture that, despite the promise of a "post-racial" society after Barack Obama's election as president, has clearly made little progress in coming to terms with the issues that divide our multiracial nation.

The Obama administration issued an extraordinary public apology Wednesday and offered to reinstate a federal official who was fired after she appeared to make racial comments on a misleading snippet of video.

When it became clear that her comments had been taken out of context, Agriculture Secretary Tom Vilsack spoke to Shirley Sherrod by phone to apologize and to ask if she would return to the department.

Let me start by saying that this opinion by Gates represents an advancement on his PBS series in the sense that he did not say a single word about reparations in his six hours of documentary and he was called out on that. Now that he has commented on the issue, he has taken another step forward by limiting his conspiracy theory of slavery to the elites and not to all Africans as appeared to be the case in the Wonders when he asked ordinary Africans what it felt like to see a descendant of one of those that they supposedly sold long ago. These baby steps forward appear to be too little too late especially because he also took massive leaps backward by blaming Africans while calling for an end to the blame-game.

This is story of Lena Horne and Max Factor. The clip is an excerpt from the 60 Minutes interview in 1981. The interview was conducted by the late Ed Bradley.