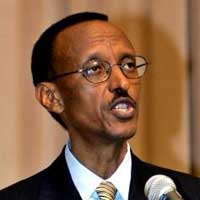 Rwandan President Paul Kagame has stressed the importance of African media telling their own story in an African context.

Addressing his monthly media briefing, the Rwandan leader warned the media against being “mentored by Western minds” while covering Africa.

During the Tuesday briefing at State House in Kigali, President Kagame finally broke his studied silence regarding his electoral intentions when he announced that he would stand for a second term in the August election.

Read more: President Kagame: We Must Tell Our Story
Empty

Good a thing that Mahmood Mamdani is coming to Nigeria to deliver Odia Ofeimun’s birthday lecture on 16th  March 2010. Mamdani is a scholar and public intellectual of note and a worthy successor to the great Ali Mazrui. If Indians have their Aijaz Ahmad, and the Caribbean have their Paul Gilroy, we often point to him as our most energetic mind. His knowledge is real, his scholarship thorough, his analysis in-depth.

Over the last five years, Britain, the United States and other countries have written off billions of dollars in loans to the world’s poorest countries. But a small group of vulture funds have been trying to divert that money into their own pockets. Investigative journalist Greg Palast traveled to the West African country of Liberia to investigate how vulture funds have been operating there and why Liberia lost a $20 million case against two vulture funds in a British court.

A short succinct summary of a critical period in Haiti’s history.

Lagos — LAST week, following a private e-mail I received from a reader of the Orbit, who I shall simply call Ogo, and who sent her questions from London, I shall delve once again into the Igbo question.

Read more: Nigeria: The Trouble With the Igbo
Empty

IT was distressing that the Umar Farouk Abdulmutallab botched Christmas day bombing incident has put Nigeria too on the global terror map. But the chilling news is that to Al-Qaeda, it has spotlighted the country as a place to invest. I explain. Osama Bin Laden and Ayman al-Zawahiri in May 1996 did not just headquarter their sinister organisation in Afghanistan; geographically, religiously and ideologically, the land was theirs before they were the land's. Insistently wild mountains, virulent man-dug caves of Tora Bora with five-star accommodations; these were geographic correlations of the Taliban's brand of Islam.

In the time of the Old Testament African rooted nations were undoubtedly among the most influential and revered in the entire world, and although biblical Africans are responsible for many of the earliest and greatest civilizations, their influence by no means end there. The story of the empires of Africa south of the Sahara extends almost 3,000 years, beginning with the establishment of the empire of Kush. Other empires later developed in Ethiopia and West Africa.

Read more: Africa in the Light of Civilization