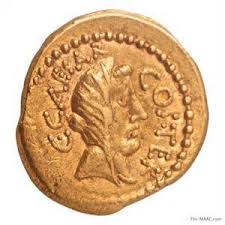 Golden Coin of Iulius Ceasar
The face of Julius Caesar on his gold aureus, Italy, Rome, 46 BC. From Palmyra Heritage – The Manhattan Art and Antique Centre New York

sorry adam, sir, for being a victim of white supremist editing, but allow me to enlighten you on the wrongly painted caesar.

his significance in history cannot be correctly established without visiting his origins, he was a descendant of the Trojan Aennas, the only descendeant of Priam that left that besieged city with his breath.

when Aennas fled the burning city secretly by night, he carried with him all the idols of the temples and most of all his royal black Trojan genes, Priam’s brother was the Ethiopian king father of the black Memnon so work it out, you white lackey if that makes him white.

his first stop was africa in Libya, safely welcomed by the black empress Dido who fled Sidon to her ancestral home Africa for fear of her murderous Zidonian black brother. he survived the great tempestous winds Hera sent to devastate him and his crew such that he lost many ships on his fleet but by mercy of tar black Zeus he reached Africa.

after a good rest at the courtesious reception of the black empress, he set sail for italy where he conquered the land and established the Roman empire, even the poets regarded caesar as the avenger of troy who came to humble the greeks for their cruelty in troy. by no means can a black descendant be deemed white even if he may look white, if thats true.

the Romans were nothind like these false Gauls that took it over after it fell many times. to even rely on statues shows much ignorance, who in this day and age does not know of the concocted history Gaulic whites came up with as an excuse for ancient history.

you can continue believing that nonsense you regard as history and let those who choose to discover differently in peace. there is very little history of the ancient world that remains undiluted by white lies, is it not that even Napoleaon could not take it to see the sphinxes black and bombarded the noses in anger of discovering that it were not whites glorified in that history but the same undermined blacks. to perform the acts of history and to assume plundered glory are different things.

Adam should know that now missionaries or teachers will be sent to correct history and put blacks in their proper significance like the way the lies were propagated, blacks should stand up for themselves and seek the truth, which unfortunately lies among lies.

aureus of Ceasar with his face on the front and goddess Clementina with the numeral LII or 52 on the obverse. This is a copy not the original.

And here below is the world famous fake statue of Ceasar, fake like the pictures of the white Jesus: 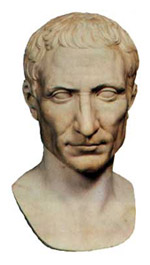