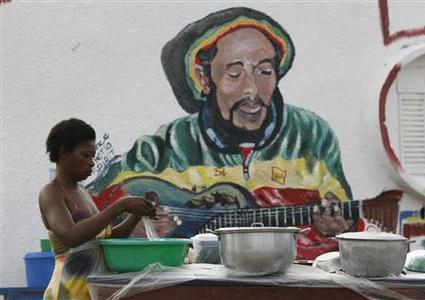 The Ivorian Rasta village was established by local artists and musicians in 1999, near the town of Port-Bouet-Vridi It currently houses about 500 families, and growing daily.

It is a monastic type settlement, where residents live a Rastafarian code of life, simplicity, tranquillity, meditation, reflection, music and dance.

In this village, the work that the others in Jamaica started, are being brought to fulfilment. Rastafari has come back home to Zion and is thriving.

Rastas in Rasta Village of Cote D’Ivoire practice the philosophy of self reliance at all times. Many are farmers, others are traders, some are artesans, some are musicians and artists while some make a living selling Rasta-style clothes and trinkets.

Amongst the many murals and symbols that brighten the village’s walls are Ethiopia’s Emperor Haile Selassie, believed by Rastas to be a reincarnation of Jesus Christ and a direct descendant of the Biblical King Solomon and the Queen of Sheba.

Then there’s Marcus Garvey, the early 20th century Jamaican Pan-Africanist whose vision of a “United States of Africa” inspired a generation of African intellectuals to demand independence for their countries. One of those intellectuals, Ghana’s first President Kwame Nkrumah, also has a spot on the village’s wall.

There is the ubiquitous red, yellow and green colours of Ethiopia, Ghana and Rastafari movement. One finds there also, Ivory Coast’s national slogan urging “discipline and work.” 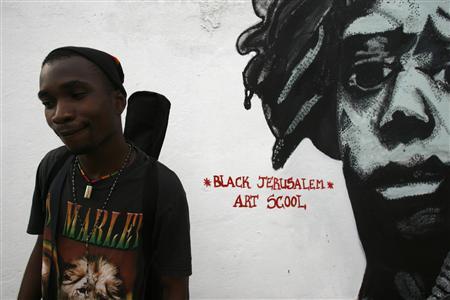 After years of economic success, the country is struggling to emerge from an eight-year political crisis, which was sparked by a 2002-2003 war and is dragging on amid accusations that all sides are profiteering from the uncertainty.

The barbarity of war, added to the inhumanity of the western imposed capitalist system, has brought out the worst and the best in the residents of Cote d’Ivoire.

Rastafarians see this moment as a unique junction, which provides Africans the opportunity to reflect on their options and make the right choices for their lives and their environment.

Despite the increasing allure of Western consumer society, their idea still holds sway over many Africans.

For many, the way of life, the independence, the music and the philosophy of Rastafari is just too strong to resist, especially amongst the youthful generation.

Those that yearned to go home from the American and the Caribbean plantations, have finally arrived in spirit and in flesh.

Oh how good and pleasant it is to observe the unification of I and I in Zion!