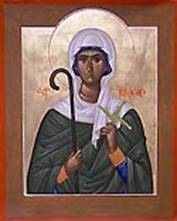 St. Brigid, “the Mary of the Gael,” was born around 450 in Faughart and died 525, about two miles from Dundalk, in County Louth, Ireland. According to tradition, her father was a pagan named Dub-thach (meaning: the black man), and her mother was Brocessa, one of his slaves.

As a child, Brigid was known for her compassion for the poor. She would give away food, clothing, and even her father’s possessions. …

St. Brigid received monastic tonsure at the hands of St. Mael of Ardagh. She established a monastery on land given to her by the King of Leinster. The land was called Cill Dara (Kildare), or “the church of the oak.”

This was the beginning of women’s cenobitic monasticism in Ireland.

Brigit the Muurish Goddess of the Celts

12 thoughts on “St Brigid of Ireland, Moorish Goddess of Ireland: The FoMuurs, the Original Muurs of Ireland”