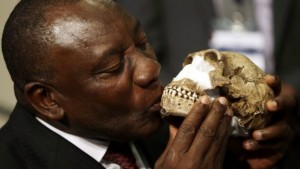 Pictured here is the South African Deputy President Cyril Ramaphosa as he allows himself to be used as a psyche ops object for Aryan supremacy masquerading as scientific theory. Here he supposedely “gets up close and personal on Thursday with the skull of a new human-like species discovered in a burial chamber deep in a cave system in South Africa.”

The Homo naledi discovery has barely seen the light of day and already an ANC MP has challenged scientists for a debate on the “whole truth about evolution”.

Dr Mathole Motshekga, who is an ANC member of Parliament and executive director of the Kara Heritage Institute, caused a storm on Twitter yesterday after he made controversial statements about the discovery of the fossils of a new species in Gauteng.

Motshekga made his doubts known on a chat show on radio station 702.

He later told City Press that the Homo naledi find confirmed “pseudo science that Africans are descendents of baboons”.

He insisted that it was his and the Kara Institute’s position, and not the position of the ANC.

The president said from Tuynhuys at Parliament hat he was very excited about the discovery and was proud that it had happened in South Africa.

“Our country is truly the cradle of mankind,” he said.

“But the African story can not only be told with stones and skulls. There is ancient literature about the universe that offers a broader perspective.”

According to him, the Kara Heritage Institute had done a lot of research. A lot of “ancient knowledge” was being suppressed.

Motshekga later replied by text message: “Palaeontology seeks to establish that humanity evolved from apes.This is based on the Western materialist world view which says ‘the world is all that is’.”

According to Motshekga this approach is one-sided and misleading and it leaves out of account the Kemetic (African) literature showing that the material universe and humanity evolved from and are made of the same substance with the creator.

“This idea is contained in the Kemetic law of correspondence which says ‘As above, so below’. A human being is both spiritual and material and pre-exists its material shape. Attempts to link human ancestors and apes are a futile exercise.”
Motshekga said a total paradigm shift was needed to educate people.

He also referred to the ancient text of Egyptian philosopher Hermes Mercurius Trismegistus, The Divine Pymander.

The document has been hailed as the book of all books in which the true knowledge of God and nature was contained.

“It provides a different view on how we understand evolution,” he said. “I challenge them [scientists] to a debate on this.”

The Democratic Alliance praised the scientists for the discovery and labelled it as a great achievement for South Africa.