Africa Resource proudly presents Philippe Dodard, an internationally acclaimed Haitian artist who lives and creates from his home in Haiti. As one of Caribbean's leading contemporary artist, his success demonstrates the visionary power of Haiti visual art that has continued to command international attention. The current exhibition by Africa House, Philippe Dodard: Spirit of the Caribbean provides an unprecedented opportunity to experience and purchase the recent works of one of Haiti’s most celebrated artist Mr. Dodard in upstate New York. His international success demonstrates the visionary force of Haiti’s art as well as the artistic fluency, perception and depth of this artist.

Born in Port-au-Prince, Haiti, in 1954, Philippe Dodard is a leading contemporary artist of the Caribbean and the African Diaspora. His artistic evolution was a series of steps, leading to major solo and international exhibitions including, Arte Americas (2008), the Venice Biennale (1999), Biennale of Latin American Drawings, Santo Domingo (1997), and the Biennale of Caribbean and Central America Art, Dominican Republic (1996). Dodard attained international prominence by rejecting the ‘primitive’, ‘naïve’ classification that dogged Haitian art. His paintings— Eternité de Mes Songes, Parole d’Ile (2005), Flûte Enchantée (1999), the Kosovo series, Femme aux Trois visages (1989), and Syncretism (1991)—are not any kind of works, states Michelle Frisch, Director of the Marassa Gallery in Port-au-Prince, Haiti. “They were like mnemonic devices . . . created at a moment of Philippe’s coming to term with the forces that texture the Caribbean ethos”. Dodard superbly blended Haitian, Caribbean and African iconographical elements to create deep complex forms. His recent choice of themes, Initiation, Consternation and Baron-Samedi reflects his transformation into “a human Poto-Mitan,” the channeling pole at the center of the Vodun temple through which the spiritual forces descend to the oumphor (temple).

The most important influence that I had was at the school of Photo-Mitan (1970) with masters Tiga (Jean Claude Garoute) and Patrick Villaire. Both of them developed the concept of contemporary Haitian art inspired from the popular tradition. While with Tiga and Patrick Villaire, I studied the principle of artistic rotation that put the student in contact with the different media as colors, clay, sound, inks, ceramics, poetry, movement in order to have a complete expression of the inner self, free from any preconceived definition of art.

I learned to develop a harmony between painting, sculpture, drawing, words, and sound to really express myself through the essense of love that I find in every human being. I find that every drop of nature that nourished my childhood, in every event in my life, good or bad, built my personality. I consider art to be the luminous breath of the human spirit. A glimmer of light that inspires love. 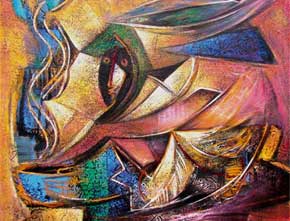 Press Release for Philippe Dodard: Spirits of the Caribbean exhibition