Today we celebrate the life and times of Malcolm X. Included in this 30 minute audio mix are excerpts from his speeches which underscore is outlook and philosophy. We also have keen commentary from people like Sista Souljah and the late Ossie Davis. Breakdown FM w/ Davey D 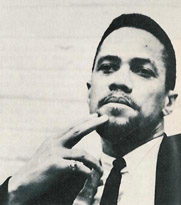 Malcolm Little was born on May 19, 1925, in Omaha, Nebraska, the son of Louise and Earl Little. Louise Little, born of biracial heritage, was a native of Grenada in the British West Indies. Earl Little, a six-foot described as very powerful in appearance, was born Georgia where he worked as a Baptist minister and organizer for Marcus Garvey. A staunch Garveyite, Earl Little believed strongly in ideas of black-nationalism and pan-Africanism. Louise, his second wife, bore six children: Wilfred, Hilda, Philbert, Malcolm, Yvonne, and Reginald. Earl Little also had three children by a first wife: Ella, Earl, and Mary. Because of Little’s advocacy for Garvey’s movement, his family was terrorized by the Ku Klux Klan and other whites. To avoid any more violent harassment by these elements Little moved his family to Lansing, Michigan. However the racism proved impossible to escape. In Lansing white racists placed a beaten Earl Little on a railway track where he was killed by an oncoming train. They claimed he committed suicide.

His father’s early death at the hands of whites would leave he and his seven siblings alone with their mother. The stress of the times placed his mother in a mental institution and Malcolm was sent to a foster home. Malcolm attended school until eighth grade living with different families. When a white teacher stopped him from trying to become a lawyer, he dropped out of school entirely. After years of transfers to state institutions and boarding houses, Malcolm moved to live with his sister Ella in Boston. Here, he took a job as a shoeshine boy at the Roseland Ballroom. But such a lowly status did not suit Malcolm and he soon took up the role of a hustler, peddling narcotics and engaging in petty thefts. Malcolm even took to straightening his hair and dating white women. But Roxbury proved to be too small for him, and in 1942 he took a job as a railroad dining car porter, working out of Roxbury and New York. Settling in Harlem, New York, he became more involved in criminal activities: robbing, selling narcotics and even working as a pimp. In Harlem he also got his nickname “Detroit Red”, because his hometown Lansing was close to Detroit and his hair was red. After a year in Harlem, Malcolm was officially initiated into hustler society. He returned to Boston in 1945 after falling out with another hustler, and continued a life of crime, forming his own house robbing gang. Arrested for robbery in February 1946, he was convicted and sentenced to prison for seven years.

While in prison, Malcolm became a follower of Elijah Muhammad, the then leader of the Lost Found Nation of Islam, with branches in Detroit, Chicago and New York. Malcolm and Elijah Muhammad corresponded by mail while in prison. Malcolm’s brothers Philbert and Reginald, visiting him in jail, convinced him to join the NOI and follow the teachings of Elijah Muhammad. Following NOI policies, Malcolm soon discarded what he deemed his “slave name”, Little, and took the new name “X” to symbolize his lost and unknown name. He improved his knowledge base by reading extensively while in jail as well as studying from the Qu’ran and following strictly the Nation of Islam’s dietary laws and moral codes.

After his parole in 1952, Malcolm X undertook organizational work for the Nation of Islam under the guidance of Elijah Muhammad. As a minister Malcolm founded mosques in Boston, Philadelphia, Harlem and elsewhere and made the national expansion of the movement possible. Malcolm’s ideology was expressed in his fiery orations, newspaper columns as well as radio and television interviews. In addition, he helped to found the NOI newspaper Muhammad Speaks. Malcolm was said to be the only black man who “could stop a race riot – or start one”. Due to his influences, NOI membership reached approximately 30,000 by 1963. In January 1958 he married Betty X, who was also a member of the Nation of Islam.

Malcolm’s rise in power became a threat to competing NOI ministers and especially to the U.S. government who, through the FBI, kept extensive files upon him. Disobeying direct NOI orders to remain silent on the matter of John F. Kennedy’s assassination, Malcolm stated it was a case of “chickens coming home to roost”. This resulted in his suspension from his NOI post and his eventual split with the organization and his father figure, Elijah Muhammad. Malcolm went on to form his own groups, Muslim Mosque, Inc. and the Organization of Afro-American Unity. Outside of the NOI Malcolm continued his messages of Black Nationalism, independence, and self-defense. His ideas of racial separation were modified but his ideas of white society and racism were by no means drastically altered in his last few years. As one scholar put it, “Malcolm never let white people off the hook”. He did however see the possibility of working with other progressive black groups.

During this time Malcolm began to advocate a more pragmatic black nationalism, stating that blacks should control the politics within their own community. At the height of his power Malcolm was one of black America’s most powerful voices. He traveled widely in Europe and Africa attempting to link the black struggle in America with those abroad. At one point he even advocated and prepared to take the United States before the United Nations for charges of “genocide” against its black citizens. In 1964 Malcolm made a pilgrimage to Mecca, obligatory for orthodox Muslims, where upon he changed his name to El-Hajj Malik El-Shabazz.

On February 21, 1964 in front of a crowd in the Audubon Ballroom in New York City, Malcolm X was shot to death by three men. Labeled as angry NOI members, the three were convicted with Malcolm’s death. However a host of suspicious events and contradictory information presented at the trial have led many to speculate whether more sinister forces, namely the US government, may have been behind his death. The only acquaintance of Malcolm to attempt to prove this point immediately following death, Leon Ameer, died of a sleeping pill overdose before his case could be presented. Thus Malcolm’s life, like his death, has remained shrouded in mystery. But even beyond death, El Hajj Malik El-Shabazz inspired generations for decades to come. His views and ideologies on black nationalism and Pan-Africanism would be picked up by many. His fascinating life, teachings, and tragic death would make him both a martyr and a model for the era of Black Power that was soon to come.

Malcolm A To X: The Man And His Ideas edited by David Gallen. Pathfinder, 1992