By Ozolua Uhakheme, Assistant Editor (Arts) for The Nation. 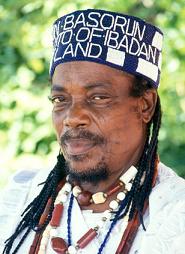 A multidimensional artist, singer, musician, actor, writer and poet, Twins Seven-Seven, one of the greatest artists of the Osogbo School, has died at aged 67. He passed on yesterday at  the University College Hospital, Ibadan, where he had been on admission following a stroke.

The artist, real name Olaniyi Osuntoki was one of the most famous products of Ulli Beier's experimental art workshops, held in Osogbo in the 1960s.

In recognition of his contribution to the promotion of dialogue and understanding among peoples, particularly in Africa and the African Diaspora, he was named a UNESCO Artist for Peace in 200, in the presence of former president Olusegun Obasanjo who was Chairman of the African Union. The ceremony took place on Africa Day.

The Director-General of CBAAC, Prof. Tunde Babawale described the death of Twin Seven Seven as another tragic news to the art and culture community, barely few days after the passing away of the Managing Director of GT Bank, Mr. Tayo Aderinokun, who was a strong arts enthusiast and collector.  According to Babawale, Twin Seven Seven was revered across the world for his art, and recognized by UNESCO as a torch bearer. “Our hearts go to the family hoping that God will grant him eternal rest. I hope many Twin Seven Sevens will strive  our landscape and I wish Osun State government will immortalize his name,” Babawale said.

Seasoned theatre practitioner and former Deputy Editor The Guardian, Mr. Ben Tomoloju, said the late artist was a pioneering prime mover of the Osogbo Arts commune. He noted that he was so versatile that he influenced a number of Osogbo artists. “His art is spiritual. Though he did not school formally in the arts, but he was a great artist respected across the globe,” Tomoloju added.

Born in 1944, his career began in the early 1960s. He has since become the most famous representative of the renowned Oshogbo school of painting, which is at the heart of Yoruba civilization. His work reflects the cosmology and mythology of the Yoruba culture. He has choose the pseudonym, Twin Seven Seven as a reference to his birth: he is the sole survivor of a line of seven sets of twins.

His encounter with the graphic arts and painting came about in 1964 when he met a group of artists known as the Mbare Mbayo Group. This is where the Oshobgo School had it's origins.Twins Seven-Seven began by drawing on paper. Drawing and engraving have remained a constant and central reference in his work. The originality of his line comes from the fact that it appears to unfold blindly, with no plan, through a progressive invasion of the entire surface. This technique gives his paintings their extraordinary detail.

With the exception of a few paintings which represent "profane" themes, the universe of Twins Seven-Seven is thoroughly rooted in the Yoruba imagery, both religious and folkloric.

To be published in The Nation Newspaper website tomorrow, Friday June 16.