Print
A Chinese artist, Lei Yixin, who is not aware of Martin Luther King Jr., and his legacy, was selected by the King Memorial Foundation in Washington DC, to sculpt the late civil rights leader. Meanwhile, Roma Group headed by Boris Dramov, is the chosen architect firm for the project. In attempting to emphasize some idea of hope for the future, the firm failed by portraying King, the man, as someone who needs to overcome, and situating him in a vast mountain of despair, that will be the King Memorial. The problem is neither Yixin nor Roma, but much of the issues raised in the article have to do with the King Memorial Foundation itself, and the ways in which they have chosen to remember and preserve Martin Luther King's legacy. The issue of representation is not a small one, but one have to keep in mind that there are ‘power players and financial backers’ including the foundation’s leadership that are calling these shots. The stone of hope, which can be viewed from Roma’s and King's foundation website, does paint a very conflicting picture. On one hand, there are two shifting ideas going on: the mountain of despair, which seems like a guiding theme of the proposed King Memorial, and the wall of hope, which is actually a large stone inside the mountain of despair, with 3D like image of King superimposed on it. In some aspects, this image represents the perpetual struggles and inequalities Black people still face in present day America, and despite the fact that it is 2007, it seems like not much has changed, as the Klu Klux Klan have traded their traditional bedsheet attire for business suits. As King eloquently reminds us in a speech to an enthused audience, “I may not get there with you, but I want you to know tonight, that we as a people will get to the promise land.” 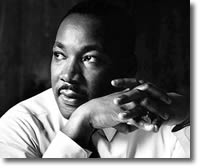 One of the greatest men in history said if a man is not willing to die for something he is not fit to live. I believe that to be true. In today’s society, standing up for a belief—especially if it seems politically incorrect—can be the same as dying. As a professional who just turned sixty-five, I know that to be true. Still, I’m willing to yell at the top of my lungs my disgust at the decision made by the King Memorial Foundation to choose a Chinese artist to sculpt the image of Martin Luther King Jr., for the first ever national memorial to an African American man.

Where are those who are supposed to protect the ideals and champion the cause? Among those pretending to be in charge are obviously too many who can not see the travesty of justice in having the “national treasure of China,” Lei Yixin—that’s Communist China—sculpt the center piece of the most important African American monument, in recognition of the most important African American movement in the history of the United States. A movement that never could have taken place in China. I am appalled.

Is it that Alpha Phi Alpha, one of the country’s oldest African American fraternities, and the executive staff of the King Memorial project—also all black, and the Memorial Foundation Leadership, could not find one African American sculptor good enough to create a likeness of King? That’s crazy. You best believe, there is not ONE national memorial, not ONE monument to a leader or historical event in China, Russia, France, Italy, India, Germany—go ahead and name them all—that has the name of an African American artist engraved in its base. It’s probably not that they don’t like us or appreciate our abilities. It’s that a commission of such importance is a legacy for a country and its countrymen. Why should the King Monument be any different?

Here was the opportunity for a national monument to a Black man in Washington D.C., to be created, developed, designed, and executed by the best that African America arts and culture and development has to offer, a testament to all our own achievements as Black people who benefited from Martin Luther King, Jr. and the Civil Rights Movement. There won’t be a second chance to make our first impression. Yet once again our worth is kicked to the curb.

So far, creating and developing the site of the King Memorial has gone to the ROMA Group, out of San Francisco, a group headed by Boris Dramov. The historic centerpiece of the King Memorial is supposed to be created by the Chinese guy. So let’s see—that leaves the digging and hauling, which in some folks’ eyes may be appropriate because this nation was built on the backs of Blacks. I, for one, am not willing to bob my head and grin over the fact that some Black subcontractor will be employed to move the dirt. Nor am I willing to allow my children’s children to visit a memorial that will not reflect African American art and culture and artistry. What was the Civil Rights Movement all about?

Lei Yixin is politics, and politics was not King’s way. We all know, as U.S. citizens, how much money our government owes the Chinese (and everybody else). But here’s the thing; the artistic accomplishments of African Americans has long been celebrated. We too have national treasures, and low and behold some of them are sculptors. More importantly, politics should not be allowed to sell the legacy of the Reverend Dr. Martin Luther King, Jr. and the historic impact of the Civil Rights movement to the Chinese.

Whose artistry and history will that plaque honor 300 years from now? The answer is NOT OURS.

As an artist, I stand against it—even if I stand alone.