Print
The film’s ninety minute length is perhaps a little short to track a person’s journey from cold and brutal wannabe gangster to a weepy baby lover. Nevertheless, the central performance from amateur actor Chweneyagae is stunning. 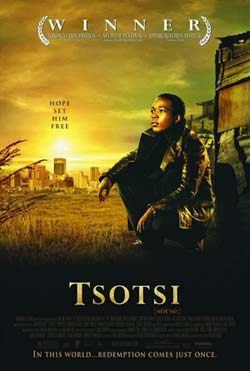 A gang of street kids from a South African township strut around like they own the place; playing dice and planning their next job. This ends up being the silent stabbing of a wealthy elderly commuter on the tube. The gang comprises of ‘Tsotsi’ (translated as ‘thug’) and also comprises ‘Butcher’ (Zenzo Ngqobe) - the most violent, the simple Aap (Kenneth Nkosi) and the failed teacher and alcoholic Boston (Mothusi Magano).

The quiet and steely-eyed Tsotsi (Presley Chweneyagae) is the leader of the pack and he does not hesitate give a brutal beating to Boston when he questions the morality of the stabbing. Thrown out of the bar where they were sitting, he runs til he ends up in the wealthy suburbs. Spotting a middle class woman struggling to open the gate of her heavily-secured home he ruthlessly takes advantage and robs her of her car at gunpoint, shooting her in the chest when she tries to protest.

Driving on, it is only when he is far down the road and a baby cries that he realises that he has inadvertently abducted the woman’s child. What is this seemingly cold-blooded thug going to do? After some tension he puts the baby in a shopping bag and runs off back into the township.

From here on in Tsotsi attempts to care for the child, despite being aware of the punishment if he is caught. His attempts are quite inept though; in one particularly memorable scene he leaves the baby with a can of condensed milk; returning to find both the can and the child crawling with ants. Needing help he holds a young township mother Miriam (beautifully played by Terry Pheto) at gunpoint, forcing her to breastfeed the baby. She helps him care for the child and helps Tsotsi on his long, slow road to redemption.

This may sound a little worthy and clichéd, and indeed the premise is. The film’s ninety minute length is perhaps a little short to track a person’s journey from cold and brutal wannabe gangster to a weepy baby lover. Nevertheless, the central performance from amateur actor Chweneyagae is stunning. He remains convincing throughout, both as a merciless thug and a confused teenager trying to do something right.

Aided by a brilliant soundtrack-a mixture of contemporary African electronica and traditional music-it compliments well the mixture of new and old that the film involves. The photography is good too, while the flashbacks of Tsotsi's brutal childhood go someway to explaining his initial inhumanity. All sides of South Africa are captured from the hazy sunsets to the depressing townships and the opulent suburbs, displaying well the shocking divisions that still exist in the country.

For me though, one aspect that made the film great was its subtle universality. It could just as easily have been set in New York, London or even Liverpool. It dwells on the problems inherent when people of different economic status and values are forced to co-exist, and the ultimate pointlessness of the wealthy trying to barricade themselves from the dangerous poor and how it is only through an attempt to communicate that we can perhaps learn to co-exist in someway.

In the end, Gavin Hood - a white South-African who trained in California - has produced a gripping and occasionally thrilling social drama that well deserved its best foreign language film Oscar.