The ill-informed multi-millionaire and uneducated rapper, Killa Cam or Cam'ron, whose real name is Cameron Giles became the face of anti-snitching in the recently aired 60 Minutes interview with Anderson Cooper. Cameron description of a snitch is very problematic, and his articulation or lack thereof, did not speak to the corporatization of such practices. Of course, Anderson Cooper, whose status prominently rose after his emotional coverage of Hurricane Katrina in the Gulf Coast did not probe this systematic structure of snitching that goes to the highest levels of government. For example, why didn’t Mr. Cooper interrogate the police commissioner about the routine brutal practices which police officers and investigators use to extract “evidence”? More importantly, to make this issue of snitching something that is only particular to Hip-Hop glosses over the activities of music executives and their role in such negotiation, the role the government plays in creating "snitch" programs that allowed them to monitor and kill Blacks, and as well as the recent activities by the Bush administration in manufacturing data for the invasion of Iraq. Where were all these information? And more importantly, why did 60 Minutes, just like the rest of the news media, continue to collude and propagate such ideas?

Be Warned Snitching Is Big Business 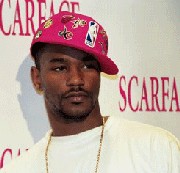 This past Sunday night Harlem based rap star Cam'ron appeared on the news investigative show 60 Minutes to talk about the 'Stop Snitching' ethos that exists throughout inner city communities. He definitely came off looking bad as he allowed reporter Anderson Cooper to ask him a number of set up questions including; whether or not Killa Cam was a millionaire and whether or not he drove a Lamborghini.

A smirking Cam admitted 'yes' to both questions. He then went on to admitting how he would not turn in a serial killer even if he lived next door. Cam said he would move but not turn the killer in. Armed with this information and a few excerpts about Busta Rhymes' refusal to cooperate with police in the aftermath of allegedly witnessing his good friend and bodyguard Isreal Ramirez being killed earlier this year, Hip Hop came off looking pretty bad. Absent from this interview with Cam was a historical or political analysis behind the 'Stop Snitching' ethos.

We didn't get a run down about how informants/ snitches in the form of 'house niggas' were the ones who doomed numerous slave revolts including the one lead by Nat Turner. We didn't hear about government programs like Cointel-pro where Civil Rights and Black liberation fighters and organizations ranging from Martin Luther King to Malcolm X and from the Black Panthers on down to SNCC (Student Non Violent Coordinating Committee) were brought down and undermined thanks to snitches (government informants). 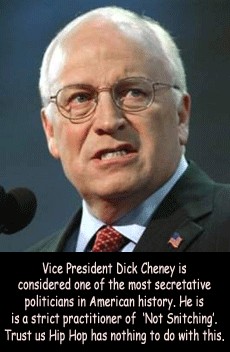 Cooper and the 60 Minutes crew interviewed NY Police Commissioner Ray Kelly and somehow forgot to ask him about the 'No Snitching' ethos that exists within the police department. We didn't hear about the infamous Blue Wall of silence. Nor did we hear about the unsavory practices used by police to get confessions and flip informants. Torture, Blackmail and other manipulations are commonplace. We didn't hear how oftentimes its the police themselves who will snitch on snitches. As we learned in the Atlanta conference that far too often its the police who will dime you out when you try to do the right thing and be a witness to a dangerous criminal. The other irony is that often times its those dangerous criminals who will dime out their crew after the police apply illegal tactics.

Also we didn't hear about the No Snitching ethos that seems to be practiced by our very secretive Vice President Dick Cheney and Presidential aid Karl Rove. We can talk about the lack of snitching around important issues like the War in Iraq, the firing of Federal Judges. Hell let's look at 9-11. Also we shouldn't forget how Cheney went into Stop Snitching mode after he shot his homeboy in the face. The Cheney bunch are the epitome of 'Stop Snitching' . They hold that position much harder then Cam'ron or any other rapper. And yeah try getting too deep into some of these guy's illegal business and you might wind up missing like anyone else.

During the 60 Minutes interview we heard conversation about how big corporations profit off of rappers like Cam rapping about people to 'Stop Snitching'. They mention his Cam's record label Asylum but they never named the executives. They never mentioned the label being founded by David Geffen who is Presidential candidate Barack Obama's biggest supporter. Nor did they mention it currently being headed by former Def Jam CEO and now Warner Music Group head Lyor Cohen.

The relevance here is that anyone who works in the music industry knows there's a serious 'No Snitching' policy especially when it comes to talking about how records get on the air. Yes we all know about payola but few of us know who the key players are and how they interact with the music industry. Just as some of those details were about to come out, we saw these big corporations settle. Hence when we have rappers talking about Stop Snitching it's important to know the entire backdrop. When Killa Cam gets on TV and talks about he's a millionaire who drives a couple of Lamborghinis, its important to know he's in the company and may have even gotten encouragement from some very powerful men who are 'Stop Snitching' practitioners that write him million dollar checks and probably drive Lamorghinis themselves.

The difference between them and Cam is that they refused to show up on 60 Minutes and offer comment. They probably consider it snitching to go on national TV and even admit to the practice. Maybe they should've given Cam the memo.

The other glaring manipulation was when Cooper and 60 Minutes talked about Lil Kim having a reality Show after she was convicted of perjury. She got praised for 'not snitching'. The Lil Kim show nettted BET one of its highest ratings in history.

Like Cam talk of Lil Kim's show was done in such a way as to make Hip Hop look not only bad but also as the sole culprit of this practice. Cooper and 60 Minutes castigated BET (Black Entertainment Television) for putting on the show but somehow stop short of mentioning Viacom as being the parent company or Sumner Redstone being its head. They made it sound like BET was all by itself, when in fact it was part of bigger machine that not only profited handsomely from the Lil Kim Reality show, but from what I was told had people outside of BET helping make this show popular.

Lastly Cooper and 60 Minutes didn't talk about how snitching via government informants is a multi-billion dollar a year UNREGULATED industry for law enforcement. Lots of money and resources are spent keeping 'snitches' on payroll. We also didn't hear about the fact that within the African American community an estimated 1 out 12 people are used as police informants (snitches). Hence this argument about the police not having people willing to come forward is a bit misleading. 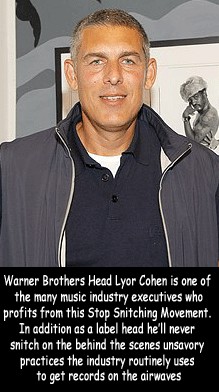 In this interview, we sat down with KC Carter who heads up Hip Hop Against Police Violence out in East Texas. We met up at a 'Stop Snitching' Conference in Atlanta last month that was put on by the ACLU. We had in attendance more than 100 people which included Hip Hop artists, professors, lawyers and police officers. We had victims of aggressive police and FBI stings which were set up by questionable informants. In this interview we spoke about was the high percentage of people who are routinely railroaded through the courts via snitches and the types of illegal tactics used to get confessions.

We also talked about how informants are used to indict large numbers of people in small out of the way towns with law enforcement using these arrests as a way to obtain funding by showing high conviction and arrest rates.

We also talked about how certain groups and individuals who are willing to speak out against the police or powerful people may find themselves victim to snitching tactics. KC Carter gives a run down of how the Geto Boys and Rap-A-Lot Records found themselves under the gun, especially after it was discovered that the Geto Boys were spending hundreds of thousand of dollars to pay for legal resources to try and few people who they feel were railroaded into Texas jails. KC talked about how informants were flooded into the 5th Ward in an attempt to bring down J Prince of Rap-A-Lot records and that law enforcement went so far as to try and get Scarface to become a snitch.

Yes indeed Snitching is big business in more ways than you can possible know. Its just a shame that 60 Minutes got Cam'ron to talk about such a serious issue, cause from what they showed, he definitely didn't break it down the way he should've. Well don't fret 'cause we break the whole thing down in this eye opening interview on Hard Knock Radio.

To listen to Hard Knock breakdown of industry snitching, click the link below: http://www.kpfa.org/archives/index.php?arch=19554