A contemporary ballet rendition by Complexions Contemporary Ballet artistic director and co-founder, Desmond Richardson. The music is Make you Feel My Love by Adele, a British recording artist and songwriter.

This title was suggested by the title of an essay by CLR James on politics in the Caribbean in which he argued, following Athenian democracy, that ‘Every Cook Can Govern’. However, the institution of slavery in Athens, the fact that Athens had a war-mongering monarchy that oppressed philosophers, and the fact that women and children did not have the rights of citizenship meant that Athens was deeply flawed as a model of participatory democracy. The unfitness of Athens as a role model is particularly so for people of African descent who suffered centuries of chattel slavery, colonization and disenfranchisement, and who have also retained radically republican democratic traditions of the sort that anthropologists dubbed headless or acephalous societies. In his recent Nyerere Lecture, Wole Soyinka concluded that one such society, the Igbo is a good model for the rest of Africa. 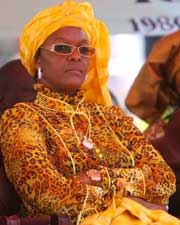 She picks the piece of cloth, ties a tiny twig around a part of it tightly in several places. The tied up parts, when dipped in the big pot of indigo dye, will not be permeated. The material is dried and then the twig is removed in some parts. It is dipped in another pot of indigo dye and by the time this process is repeated in several pots of dyes, the parts tied up with twig and removed gradually have formed several colourful patterns.

A video presentation from Know The Ledge Tv part of the T.H.U.G W.I.F.E. Know The Ledge Tv is a consciousness-oriented production for truth, peace, love, freedom and justice. The video was produced by Phil Thomas Moreland.

This is a place for Africans on the continent and those in the diaspora and anyone who has the continent at heart to discuss issues and bring out the best in Africa. This is where we really can work as partners for the development of the African.