The Father of Moldavian Hesychasts’—St Daniel the Hesychast 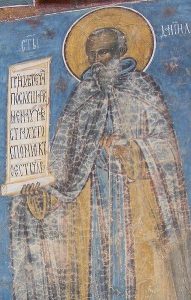 Here is the brief Life composed by Fr Ioanichie:

Our holy Father Daniel the Hesychast was one of the greatest Saints brought forth by the Moldavian land, a great teacher of the desert and a guide of monks.

This Romanian Saint was born at the beginning of the fifteenth century to a family of poor people who lived on the estates of Saint Nicholas Monastery in R?d?u?i. He was named Demetrius at Baptism. He became a monk at this same monastery when he was sixteen years old and was given the name of David. After some years of severe asceticism, he was granted the grace of the priesthood and went to live at Saint Laurence Monastery in Vicoul de Sus commune. Then being called by the Holy Spirit to the life of the desert, he became a schemamonk with the name of Daniel sometime before 1450. At first he lived the ascetic life alone in unknown spiritual labors in the valley of Secu Brook near Neam? Monastery, and then in a small cell carved out of rock in the valley of Putna Creek.

After the consecration of Putna Monastery in 1470, Saint Daniel the Hesychast went to live in the vicinity of Vorone? Monastery, where he carved for himself a cell out of rock under Falcon Cliff. He lived the ascetic life here for twenty years, pleasing God, training many disciples, and performing many miracles of healing.

When the church of Vorone? Monastery was built in 1488, Saint Daniel the Hesychast—who was then over eighty years old—moved down to the community and became the abbot of this monastery. He lived for a short time longer and was honored by the people as a Saint and miracle-worker. Saint Daniel gave his soul into the hands of God about the year 1496 and was buried in the church, where his relics remain until today. [4]

Fr Ioanichie tells us that as a child, St Daniel ‘was never absent from church, nor did he play with other children, or seek repose and food, but rather he always prayed and was obedient to his parents in all things.’ He continues:

When he was about ten years old, the child Demetrius was given to Saint Nicholas Monastery in R to be educated. Although young in age, he showed himself old in understanding, for he quickly learned the Horologion and the Psalter by heart, as well as the practice of spiritual asceticism. [5]

A spiritual child of the holy hierarch St Leontius of R?d?u?i, as a monk St Daniel ‘loved silence, fasting, and prayer most of all. . . . In his cell he slept a little on a small stool, keeping vigil often and meditating on divine things. He loved the Psalter greatly, knew it by heart, and repeated it daily.’ [6] Later in his account, Fr Ioanichie refers to St Daniel’s life in a cliffside cell in the valley of Viteu Brook:

The asceticism practiced by our holy Father Daniel the Hesychast in his cell was this:

Day and night he kept vigil in unceasing prayer and meditation on divine things, fasting until sunset. He didn’t leave his cell all week. His food was dried bread, roots, and herbs, and for handiwork he wove baskets of withes. On Sunday he celebrated the Divine Liturgy and communed the Body and Blood of Christ. Afterwards he received those who came to him for healing and for a profitable word. During the fasts he would fast for as much as three and sometimes five days. He had the gift of prayer and tears. [7]

There are some interesting references to the variant activities and lifestyles of St Daniel’s disciples. First, Fr Ioanichie tells us:

He soon became the spiritual father of dozens of hesychasts who labored in the forests of Vorone?, in the Rar?u Mountains, and over the length of the Eastern Carpathians. Most of them practiced the Jesus Prayer, fasting, and silence, others read the Psalter daily, others made thousands of prostrations and wove baskets, while others, being good calligraphers, wrote service books for churches and monasteries. [8]

Later on, Fr Ioanichie writes specifically of the Fathers of Vorone?:

During his abbacy Vorone? monastery reached the height of its spiritual flourishing, being for a long time considered Moldavia’s lavra of hesychasm. All the monks of the community, over sixty ascetics, practiced the Jesus Prayer. Some were renowned pastors and spiritual fathers for the faithful, others were learned teachers in the monastery school and untiring calligraphers, and most were monks of prayer who glorified God unceasingly and prayed for the whole world. Many parish priests, abbots, bishops, monks, hesychasts, and officials were educated and learned spiritual asceticism at Vorone?. More than fifty other hesychast disciples of Saint Daniel lived in asceticism out of love for Christ in the age-old forests of the Vorone?, Rar?u, and Stîni?oara Mountains. The great Abbot and guide of souls, ‘our holy Elder, Father Daniel the Hesychast’, directed all these men and guided them on the good path to the Kingdom of Heaven. [9]

I have already referred to St Daniel’s relationship with St Stephen the Great of Moldavia in my post on the latter. Although he flubs the holy Prince’s name, calling him ‘Petru Rares’ [10], Fr John McGuckin in what looks to be a fascinating article refers to St Daniel’s counsel to St Stephen during his battles with the Turks as an example of the ambivalent attitude to war and violence in the Eastern Church. Fr McGuckin writes:

The saint commanded the prince to erect monasteries on the site of the great battles, to ensure mourning and prayer for the lost souls whose blood had been shed. This was an act that was seen as a necessary expiation of Petru’s ‘equally necessary’ violence. Both he and his spiritual mentor were heavily burdened by their perceived duty of defending the borders of Christendom. To this day Romania’s most ancient and beautiful churches stand as mute witnesses to a bloody history where Islam and Christianity’s tectonic plates collided (as often they did in the history of the Christian East). [11]

At one point, speaking of St Daniel’s call by the Holy Spirit to the desert-dweller’s life, Fr Ioanichie writes, ‘His soul was wounded by the love of Christ and he desired to glorify Him unceasingly with the angels and with the hesychasts who lived in the Carpathian forests.’ [12] I cannot help but pause and reflect here. I first learned of the Carpathians when I read the words of Jonathan Harker in his journal entry from Bistritz on 1 May: ‘I find that the district he named is in the extreme east of the country, just on the borders of three states, Transylvania, Moldavia, and Bukovina, in the midst of the Carpathian mountains; one of the wildest and least known portions of Europe.’ [13] Thus, in my imagination the Carpathians took on a dark, superstitious, even Gothic cast from my very first encounter with them. But more importantly, due to the idiosyncracies of my childhood, it was a landscape that stuck with me. The Carpathians were to me something like what Narnia probably is to many other children.

Little did I know then that, as Bishop Seraphim notes, what ‘appears to be the most ancient monastic center in the Romanian land’ consisted ‘of a notable number of sketes and stone cells located in the mountains in the angle of the Carpathians.’ [14] The discovery not only of Orthodoxy, but Orthodoxy in its deepest and most radical form in the midst of that imaginative landscape of my childhood gave me a wonderful sense of fulfillment, of everything being brought full circle by God’s providence. Lewis speaks of the baptism of his imagination. For me it was like discovering that much of what I’d imagined had already been baptised. (For more examples, see this post, and this one.)

The image at the top of the post represents the first depiction of St Daniel ‘as a Saint with a halo’. It was painted by his disciple, Metropolitan Gregory (Ro?ca) ‘in 1547 on the southern wall of Vorone? Monastery, to the left of the entrance to the pridvor as can still be seen today. He is holding in his hand an open scroll on which is written, Come, brothers, hearken unto me. I will teach you the fear of the lord. Who is the man . . . (Ps. 33).’ [15]

[10] Petru IV Rare? was a Moldavian voievode of the 16th century.